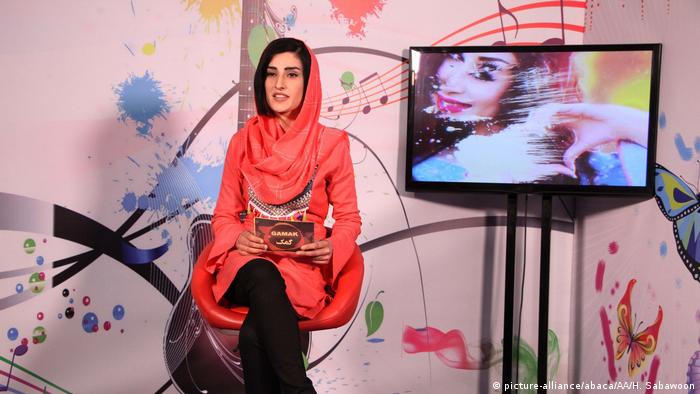 From May 21, female presenters will no longer be able to appear on Afghan television without covering their faces

The Taliban authorities in Afghanistan have asked local television broadcasters to ensure that female presenters cover their faces when on air, an official said on Thursday.

"Yesterday we met with media officials... they accepted our advice very happily," said Akif Mahajar, spokesman for the Taliban's Virtue and Vice Ministry.

He also added: "The last date for face covering for TV presenters is May 21."

The Taliban authorities have informed all television stations that the new order is "final and non-negotiable," the Afghan media outlet TOLOnews said.

One prominent TOLO presenter, Yalda Ali, posted a video of herself putting on a face mask with a caption: "a woman being erased, on orders from the Virtue and Vice Ministry."

Mahajar said female presenters could wear a medical face mask, as has been widely used during the COVID-19 pandemic.

Images of women anchors and presenters circulated on social media on Thursday, with masks covering their faces. One television producer said the order meant "only the eyes of the female presenters must be visible."

In March, the Taliban banned all visual foreign media outlets, including the BBC and Deutsche Welle, as officials were unable to check content, including the reporters' attire, a Taliban official said.

What is the state of women's rights in Afghanistan?

The move comes days after authorities ordered women to cover their faces in public, a return to a policy of the Taliban's past hardline rule.

Most Afghan women wear a headscarf for religious reasons, but many in urban areas such as Kabul do not cover their faces. During the last Taliban rule from 1996 to 2001, it was obligatory for women to wear the all-encompassing blue burqa.

Since the Taliban returned to power in 2021, it has imposed severe restrictions on the media and cracked down on human rights in Afghanistan.

Girls and women have been deprived of many of their rights, including education, work and freedom of movement.