Protesters have attempted to storm Taiwan's parliament over plans to cut pension payments to military retirees. One former colonel fell two stories as he tried to enter the Taiwanese parliament. 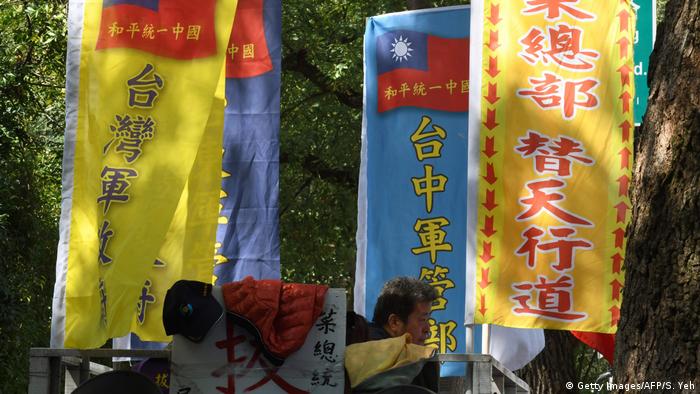 A retired Taiwanese army colonel was rushed to hospital on Tuesday after falling two floors from an office building during a protest against planned cuts to the country's military pension system.

Miao Teh-sheng was reportedly climbing up a four-story building opposite the Legislative Yuan, Taiwan's parliament, to try and enter the grounds when he slipped.

Miao injured his back and head despite a police officer's attempt to break his fall.

The retired colonel was one of more than 100 retired military officers taking part in a demonstration against a plan by the center-left government of Taiwanese Premier Lai Ching-te to lower monthly pension payments for veterans.

Around 100 former officers brought down a gate to the Yuan and clashed with police as they tried to enter the building. Retired general Wu Sz-huai reportedly fainted during the altercation.

The premier had been expected to present a report on planned cutbacks to the Yuan later on Tuesday. The changes would see monthly payments capped at just under 39,000 New Taiwan dollars (€1,080; $1,330), which is lower than what military retirees currently receive.

"Military pension reforms are to ensure the pension system can develop sustainably," the government said. It has said public pension funds could go bankrupt as early as 2020 without the proposed changes.

But protesters have called on lawmakers to halt a bill that would introduce the cuts and to enter negotiations with veterans.

The planned reduction is part of a larger drive to scale back civil servants' pension payments amid what the government has said are unaffordable high-interest rates.