A senior al-Qaeda figure has urged the group to do what is necessary to protect the "holy struggle of the Syrian people." Washington voiced skepticism over the split, saying it could be an exercise in rebranding. 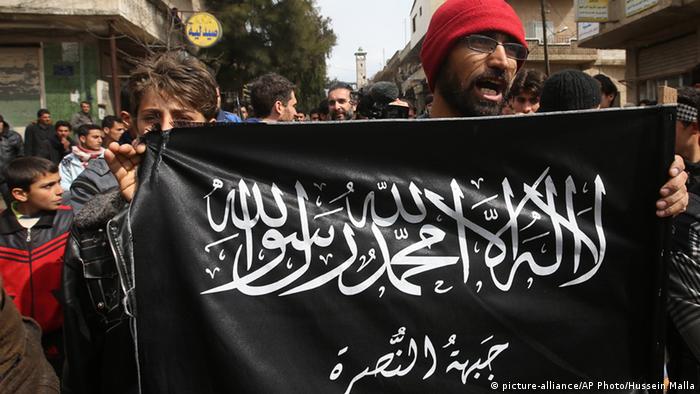 Syria's Nusra Front chief, Abu Mohammed al-Golani, on Thursday announced that the militant group he leads will formally split from its affiliate al-Qaeda and rebrand itself as the "Levant Conquest Front."

The final ounce of diplomacy devoted to Syria

Russian and US negotiators are resuming Syria peace talks in Geneva. They hope to unveil a military cooperation plan for the war-torn country. Moscow and Washington have good reasons to reach a pragmatic agreement.

Russia holds off on airstrikes against al Nusra Front

Moscow has halted its bombing of al Qaeda-affiliated al Nusra Front in Syria, in order to allow other rebel groups to move clear of its positions. The US said there was "commingling" among al Nusra and rebels. (25.05.2016)

Al Qaeda has launched a wing aimed at expanding operations into India, Bangladesh and Myanmar. It also delivered a snub to the "Islamic State" group, which itself is reported to be distributing pamphlets in Pakistan. (04.09.2014)

"We must declare the complete cancellation of all operations under the name of al-Nusra Front, and the formation of a new group operating under the name 'Levant Conquest Front,' not that this new organization has no affiliation to any external entity," al-Jolani said in a video aired on Qatar's al-Jazeera English channel.

Nusra Front entered the Syrian conflict in January 2012. However, it only pledged loyalty to al-Qaeda in 2013 after rejecting calls to join the "Islamic State" militant group, which it views as a key rival.

"We direct the leadership of Nusra Front to go ahead with what preserves the good of Islam and the Muslims, and protects the holy struggle of the Syrian people," said al-Qaeda deputy leader Ahmed Hassan Abu el-Kheir.

"We urge them to take the appropriate steps towards this matter," Abu el-Kheir added.

The recording also included a brief remark from al-Qaeda chief Ayman al-Zawahri, saying: "The brotherhood of Islam is stronger than any organizational links that change and go away." However, it is unclear when al-Zawahri made the statement.

That month, the US State Department labeled the opposition group a "terrorist organization," saying it is "little more than a front" for al-Qaeda in Syria.

Washington on Wednesday said it sees no reason to change their position on Nusra Front, but will continue to assess the situation, the group's actions and its ideological positioning.

Last week, the US State Secretary John Kerry and Russian Foreign Minister Sergei Lavrov said both countries had agreed to continue targeting the "Islamic State" and Nusra Front as they push for another "cessation of hostilities."

However, Nusra Front's decision to distance itself from its ideological center and rebrand itself could make it easier for other rebel groups to fight alongside with the group without possible recourse, although it is unclear how this will effect Washington and Russia's choice of targets.