'Islamic State' militants have reattempted to capture a crossing connecting the Syrian Kurd town of Kobani with Turkey. If they succeed, it could prevent Iraqi Kurd reinforcements from reaching the town. 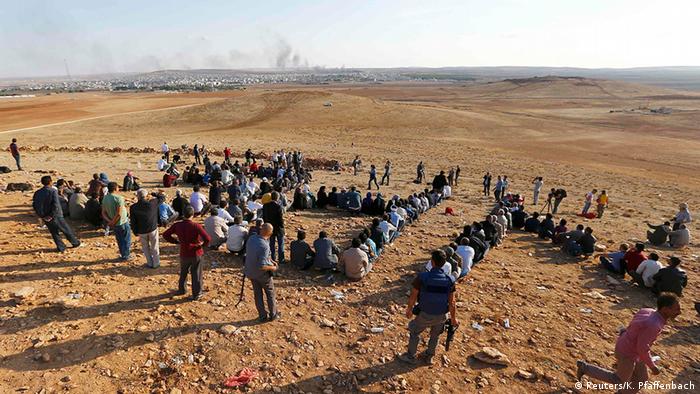 Fighting continued on the outskirts of the embattled Syrian border town of Kobani on Saturday as jihadist militants from the group "Islamic State" made a renewed bid to capture the Mursitpinar crossing into Turkey.

The fierce fighting prompted the Turkish army to evacuate reporters who have been observing the battle for Kobani from nearby hilltops.

The clashes come as the Kurdish forces defending the town, which is known as Ayn al-Arab in Arabic, wait for promised reinforcement by Iraqi Kurd fighters coming through Turkey.

If the Mursitpinar crossing is captured, it could prevent the reinforcements from joining their fellow Kurds in Kobani, who have been fighting to defend the town for weeks against an onslaught by the IS extremists.

Help on its way

Kurdish news agency Rudaw reported on Saturday that the first contingent of 150 Iraqi peshmerga fighters could head to Kobani as early as Sunday, but this has not been confirmed.

Ankara has agreed to allow the Iraqi Kurd fighters passage through Turkey to aid in the defense of the town.

The Turkish government has otherwise been reserved in its response to the battle for Kobani, as the main Kurdish force in the town has links with the outlawed Kurdistan Workers Party (PKK). The PKK has carried out a three-decade insurgency for self-rule in southeastern Turkey in which thousands have died.

Rudaw said the peshmerga - Kurdistan's official armed forces - would be equipped with heavy weapons, but had agreed with Ankara and Washington not to pass them on to the Syrian Kurdish forces.

Ankara has expressed concern that such weaponry could fall into the hands of the Kurdish rebels in Turkey.

Washington carried out an air drop of light weapons to Kurdish defenders in Kobani last weekend in a move that angered the Turkish government.

The United States and Arab allies have also been carrying out airstrikes on the IS militants in a bid to stop their advance.

For weeks, the battle has raged around the Syrian town of Kobani. A few kilometers away, in the Turkish city of Suruc, thousands feel like helpless observers. (25.10.2014)