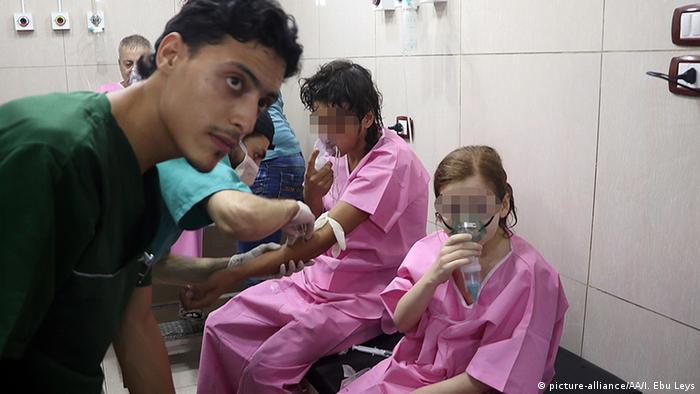 A spokesman for the White Helmets, a volunteer first responders team in Syria, confirmed the incident but provided a higher number of injured in the rebel-held area. At least 80 people were hospitalized for breathing problems, including 50 women and children, Ibrahem Alhaj told the dpa news agency.

The White Helmets also posted a video of rescue workers searching for survivors in the rubble. Paramedics are seen washing victims.

"He smells like chlorine all over," one medic says while washing a child with water.

An UN report last month confirmed that warring parties in Syria used poisonous gases as weapons, despite the 2013 agreement to remove and destroy the chemical weapon stockpile.

The Syrian regime was behind at least two such attacks, with the "Islamic State" group responsible for at least one of them, UN investigators said.

Damascus denied the accusations, citing the lack of "physical evidence."

The White Helmets have since accused the regime of another chlorine attack in August.

The UN's Syria envoy has said that if confirmed, reports of a chlorine attack in Aleppo would constitute a "war crime." Both sides of the conflict have accused each other of using chlorine gas. (11.08.2016)