A busy open-air market was targeted in an airstrike, according to monitors. The town of Ariha in Idlib province has been the focus of a Syrian offensive against the last rebel stronghold in the northwest. 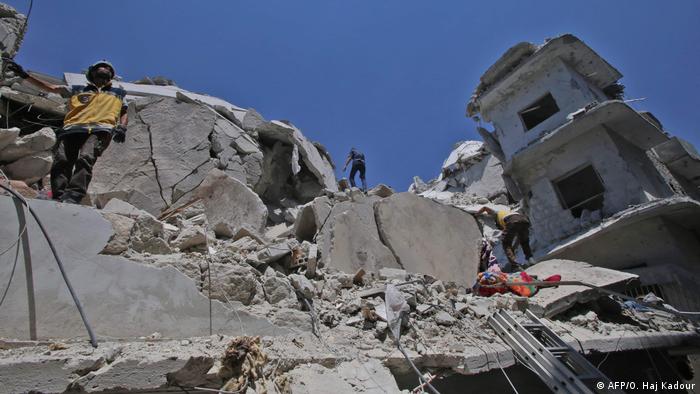 The UK-based Syrian Observatory for Human Rights and another activist collective, called Ariha Today, said the town had been targeted by Syria's government in a bid to restart an offensive it began in April.

"The strike hit the main square, in the center of town" as residents were buying necessities, according to an activist quoted by The Associated Press. An 18-month girl had her leg amputated, surgeon Mohamad Abrash said. "This is a systematic displacement policy to empty the busy town."

Ariha was also struck on Wednesday, when 10 civilians died. One of the victims was a girl trapped in the rubble with her two sisters.

Many of the 3 million people living in Idlib province have been displaced from elsewhere in Syria since the civil war broke out in 2011.

On Friday, UN rights chief Michelle Bachelet condemned "international indifference" over the rising death toll. She listed airstrikes on schools, hospitals, markets and bakeries that had killed at least 103 civilians over the past 10 days.

"Intentional attacks against civilians are war crimes," said Bachelet, adding: "Those who have ordered them or carried them out are criminally responsible for their actions."

The Syrian government, with support from Russian and Iranian forces, has staged sieges that forced rebels to surrender and move further north.

US calls for German ground troops in Syria