Syrian opponents focus on aid and prisoners in Geneva

A second day of peace talks between Syria's warring sides has focused on the release of prisoners and the fate of those kidnapped or missing in the country. The direct negotiations began on Saturday in Switzerland. 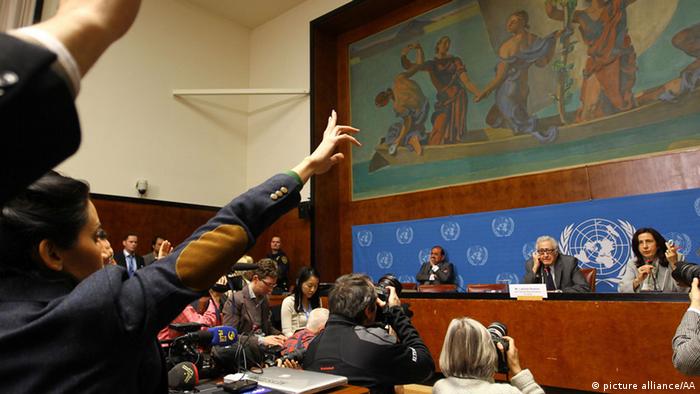 Ahead of Sunday's meeting, UN mediator Lakhdar Brahimi said the day's talks would focus on "a lot of people who have lost their freedom," including "thousands and thousands of people in jails of the government."

Opposition figures on Sunday said they presented a list of thousands of detainees whose release they are seeking, including women and children whose freedom they say is a priority.

The Britain-based activist group the Syrian Observatory for Human Rights estimates that at least 17,000 people have gone missing in Syria's ongoing civil war, while tens of thousands are being held in government jails and thousands others kidnapped by armed groups, including Islamist militias.

The International Committee of the Red Cross has said "untold numbers" have disappeared in Syria, and that the organization has not been allowed to visit any of the country's prisons in the past two years.

The treatment of Syrian prisoners was thrown into the spotlight earlier this month when former international prosecutors released a report alleging the "industrial-scale" torture and killing of detainees by the regime.

Syrian Foreign Minister Walid Muallem had said before the Geneva talks that the regime was "ready to exchange lists and develop the necessary mechanism" for prisoner swaps with the rebels.

Sunday's talks came a day after delegates from the regime of Syrian president Bashar al-Assad and the opposition sat together for the first time in the same room. Brahimi said on Saturday the two sides would discuss humanitarian issues as a "confidence-building" measures before moving on to more polarizing political issues.

The first meeting focused on humanitarian aid to the besieged city of Homs, where the opposition says some 800 families urgently need food and medicines.

Brahimi said he had hoped a deal could be reached on Sunday, so a convoy could enter the city as early as Monday.

"If we achieve success in Homs we hope that this will be the beginning," Brahimi said.

But opposition delegate Monzer Akbik has accused the government of "stalling" over the issue.

"The regime said they will have to go back to Damascus to make a final decision on this and they will give an answer later today," Akbik said.

"This is a stalling technique ... We have noticed lack of seriousness from the regime side."

Obaida Nahas, a member of the opposition coalition's negotiating team, said that a convoy of 12 trucks was waiting to deliver humanitarian aid to the families in Homs.

In Geneva, the two conflict parties from Syria engaged in talks about possible preliminary steps toward a de-escalation of the civil war. Allowing access to aid groups and an exchange of prisoners are on the agenda. (26.01.2014)

Pulled together by the United Nations, Russia and the United States, the two sides have met for the first time in the biggest diplomatic push yet to stem Syria's bloodshed after nearly three years of civil war. The peace talks in Switzerland are set to last for an initial period of a week.

Some 130,000 people are thought to have died so far in Syria a wide-ranging conflict that began with peaceful protests against Assad in March 2011. The conflict has forced millions of people to flee their homes, as well as attracting al Qaeda-linked militants into the fray.

Brahimi has said that the most divisive issue, that of forming a possible transitional government, will not come up until at least Monday.