Salih Muslim, former head of the Kurdish PYD in Syria, has been wanted by Turkey since a deadly bombing in Ankara in February 2016. The Turkish Interior Ministry offered a million-dollar bounty for his capture. 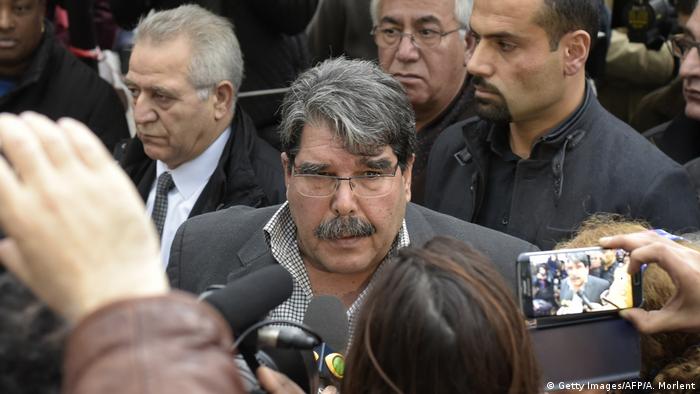 Salih Muslim is a former co-chair of the Democratic Union Party (PYD), the dominant Kurdish political party in Syria.

The PYD is the political wing of the People's Protection Units (YPG), which Ankara considers to be a "terrorist group" with ties to the banned Kurdistan Workers' Party (PKK) fighting a three-decade-long insurgency against the Turkish state.

The YPG is the main force in the US-backed Syrian Democratic Forces (SDF) fighting against the "Islamic State" (IS).

Muslim was in Prague on Saturday to attend a conference.

After a Turkish participant took a photograph, Czech police detained Muslim, following the request by Turkey.

"Ankara Interpol staff were informed of the arrest. The police will take the standard steps in line with the law," they said in a statement.

Read more: 'The Kurds put their trust in the US and the West'

Ankara's government spokesman, Bekir Bozdag, said on Monday that Turkey's Justice Ministry had filed an extradition request with Czech officials. The request will have to be approved by a court and the justice minister.

Bozdag added that Muslim would appear in court on Monday.

Since stepping down as the head of the PYD, Muslim has been a foreign representative of TEV-DEM, the governing political coalition in the autonomous Kurdish region set up in Syria during the civil war there.

Should Muslim be extradited to Turkey, he would be one of the highest-ranking Kurds to be captured since the 1999 arrest of PKK founder Abdullah Ocalan.

Muslim has been wanted by Turkey in connection with a February 2016 bombing in Ankara that killed 30 people. He denies any connection to the attack, which was claimed by a hard-line PKK splinter group.

Earlier in February, Turkey elevated Muslim to its most-wanted list, and offered a $1 million (€810,000) reward for his capture. He faces 30 life sentences if convicted.

The PYD said in a statement that Muslim's detention was "illegal and immoral act by Czech authorities."

It also accused Turkey of using "dirty methods in chasing personalities that are playing a role in the fight against terrorism," a reference to Muslim's role in mobilizing Kurds against IS.

Until 2015, Turkish officials were in regular contact with him as Ankara pursued a peace process with the PKK that ultimately broke down.

Muslim regularly moves around Europe, where he has been based for several years.

He was reported to have been in the Czech capital to attend a conference on the Middle East.

At the top of the conference agenda was the situation in Afrin, a Syrian Kurdish enclave against which Turkey launched an offensive last month.

A Turkey-based Kurdish group has published an online statement claiming responsibility for the car bombings in Ankara. The statement disputes a claim by Turkey's government blaming the blast on YPG militia from Syria. (19.02.2016)

The leader of the main Syrian Kurdish party has told DW that Turkish accusations his group was behind the bombing in Ankara are fabricated. He warned of a dangerous Turkish escalation in Syria. (18.02.2016)

In wake of Ankara attack, Turkey targets PKK positions in Iraq and Syria

In the wake of the bomb attack in Ankara, Turkey has carried out airstrikes on PKK positions in Iraq. Turkey claims two bombers were involved in the car bombing: one a Syrian and the other a PKK militant. (18.02.2016)