Syrian government retakes ancient city of Palmyra from IS

Backed by Russian airstrikes, regime troops have successfully cleared the terrorists out of the area. This was the latest in a series of key defeats for so-called "Islamic State" militants. 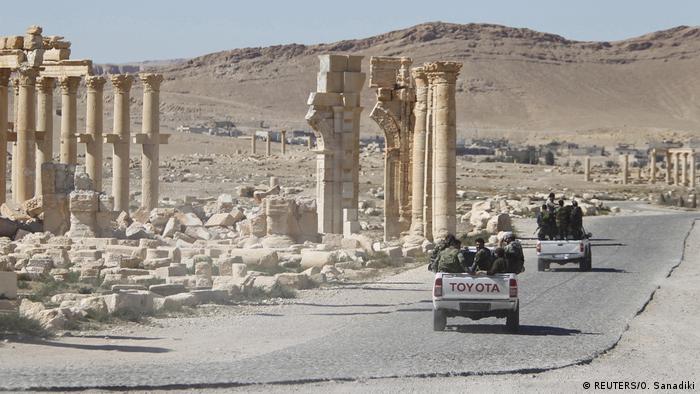 Syrian government forces announced on Thursday that they had successfully pushed "Islamic State" (IS) terrorists out of the old city of Palmyra for the second time in a year. The victory came after weeks of bombardment from the Russia air force.

"With backing from the Syrian and Russian air forces, units of our armed forces recaptured the city of Palmyra, in cooperation with the allies," the military said in a statement, likely referencing the Iran-backed militias that have been fighting alongside government troops.

IS has know withdrawn completely from the city, the latest in a series of defeats that seem likely to herald the end of their self-declared caliphate. In Iraq, serious advances against the jihadis in the city of Mosul has also dealt the group a crushing blow.

The terrorists were first pushed out of the UNESCO World Heritage Site in March 2016, but not before they had destroyed the 2,000 year old Temple of Bel and other priceless artifacts. The briefly retook the area in a surprise offensive in December, but by Thursday the government was back in total control of the remains.

The battle against IS is now largely focused on the region east of Aleppo, where the terrorists are clinging to territory that stretches to the Euphrates river.

Fighting was taking place against the backdrop of UN-brokered peace talks in Geneva, where representatives of President Bashar al-Assad's regime were meeting with moderate rebels groups to try and bring an end to nearly six years of conflict.

At the meeting, rebel leaders declined to celebrate the recapture of Palmyra, expressing concern that Assad's forces could let it go again as they had in December.

"You as expert professional journalists should be aware of it: if we want to follow the game of Assad and Palmyra it will be like watching Tom and Jerry," a leader for the rebel umbrella group HNC told reporters, referencing the famous cartoon foes.

Suicide attacks on two security service bases in the heart of Syria's government-held third city of Homs have killed 42 people, state media report. The attacks occurred as peace talks are underway in Geneva. (25.02.2017)