Syrian children in Turkey forced to work rather than study | Europe| News and current affairs from around the continent | DW | 05.12.2017

They work up to 12 hours a day to help their families. Labor is part of daily life for many displaced Syrian children in Turkey. Studying is a luxury, and so is play. Julia Hahn reports from Istanbul.

It's 8 a.m. The muffled clattering of sewing machines can be heard outside on the street. Aras Ali hurries down the stairs into the neon-lit glare to make sure she's on time for the start of her shift. Aras is 11-years old, and the tailor's shop in Istanbul's Bagcilar quarter is her workplace.

The girl works with several other children to make sure the seamstresses are constantly supplied with material. She cuts the colorful fabric with a pair of scissors and sorts it so that individual sections of cloth lie ready for the clattering machines. The women are sewing them into ladies' underwear.

Cut, pile up, cut, pile up. Twelve hours a day, Monday to Friday, for the equivalent of about 150 euros ($180) a month. Four years ago Aras fled the northern Syrian town of Afrin with her family and came to Turkey, first to Gaziantep, then Istanbul.

"Rent, food, the water bill: It's all so expensive here," the girl said. "My mother isn't too well, and one of my sisters is sick, so I have to work to help them." This is the kind of thing you hear from almost every child in this workshop. It's apparent that these are children who have had to grow up much too fast.

The issue is not new. "Child labor has been a structural and very widespread problem in Turkey for a very long time," said Sezen Yalcin, who works for the rights organization Support to Life. "It's even reflected in people's mindsets: Many people think it's not a problem in most of the cases."

Precise figures aren't available, but the number of children conscripted into the workforce in Turkey has risen sharply alongside the number of displaced people admitted to the country since 2011. So far, Turkey has taken in more than 3 million Syrians — more than any other country in the world. No other country has provided a home to so many displaced children: UNICEF estimates that there are 1.2 million living there. But only a few live in the official camps in the southeast of the country near the Syrian border. Most families try their luck in the big cities. As many as 1 million displaced people are estimated to be living in Istanbul alone.

"Most of the children working in Turkey used to attend school back home in Syria, so it's a drastic rupture in their lives and childhoods," Yalcin said. "When they start to work, their childhood ends — forever, or for a while at least."

The law is unambiguous: Child labor is forbidden in Turkey. Anyone employing girls and boys younger than 15 is liable to be prosecuted. Nonetheless, the children work in the textile or agricultural industries, as cutters, or as harvest workers in the fields. Anywhere where the state doesn't look too closely and where social security contributions and occupational safety are ignored. 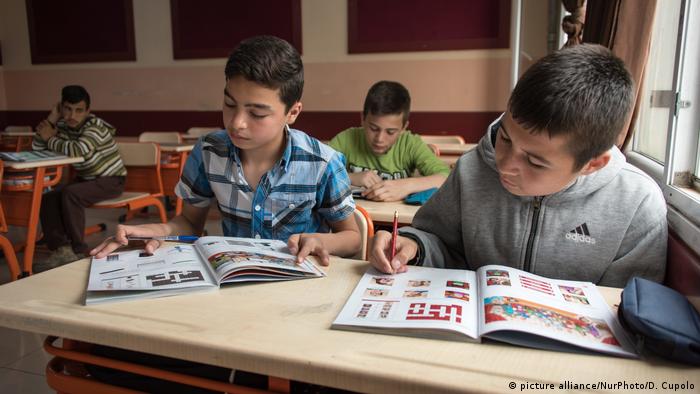 The government intends to introduce compulsory preschool and elementary education and has announced that it will provide a place for every displaced Syrian child within the next three years. But that's a long way off. According to the Education Ministry, at least 300,000 Syrian children still have no access to schooling. Aid organizations assume that the actual figure is much higher.

"The public schools' capacity is overstretched," Yalcin said. "In addition, the teachers need to be supported, as they're working with many traumatized kids. It's not enough to provide them with schooling facilities: They also need psychological support."

Many children are exploited because their parents are poor. Aras has two sisters, and her mother is pregnant again. Her father has a job, but he works illegally. Even with the extra money Aras is earning, the family can barely survive. Their two-room apartment is far too small; all five of them sleep in the same room. "We have to send Aras out to work," said her father, Abdurrahman Ali. "In Syria my salary was enough to support us all. But here everything is so expensive; I simply can't do it alone."

Since the start of 2016, Syrians with refugee status have been allowed to apply for work permits in Turkey. In practice, though, that's far from easy. At the start of 2017, according to government estimates, fewer than 1 percent of people eligible had such a permit. Yalcin is all too familiar with the problem: Her organization tries to support refugees when they visit the authorities. "It's very important to understand the root causes and focus on Syrian integration in Turkey," she said. "These families do not have access to decent jobs to sustain their lives and families. It's essential to invest in Syrians' access to the labor market, their capacities for integration into the labor market, in order to build up their resilience."

That would be an important step in removing children such as Aras from the workforce and getting them education. "Of course I'd like to go to school, like all my friends," Aras said. After all, she wants to be a teacher when she grows up.

Read more: Education is key to refugee kids in Turkey