Civilians have fled eastern Aleppo as government forces continue their assault on Syria's second city. In the past 13 days, regime bombardments have killed more than 200 civilians - including at least 25 children. 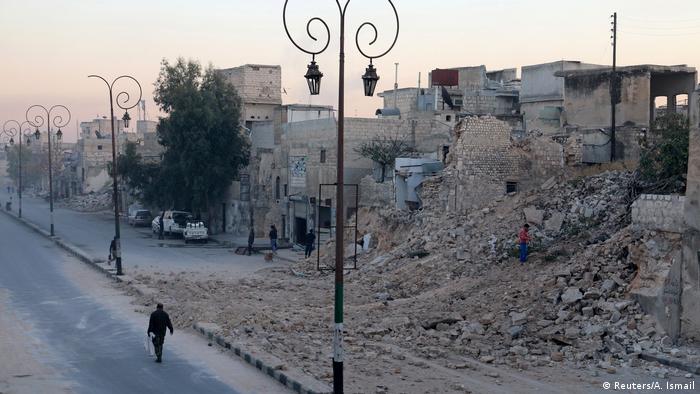 "The army's rapid advance is due to its strategy of attacking east Aleppo on several fronts, weakening the rebels," said Rami Abdurrahman, head of the UK-based Syrian Observatory for Human Rights.

According to the opposition-aligned NGO, over the past day nearly 1,700 civilians have fled to government-held parts of western Aleppo and another 2,500 to the Kurdish-controlled northern district of Sheikh Maksoud.

Dozens of families have fled the districts of Sakhur and Haidariya as regime raids and artillery fire killed at least 18 civilians in several districts, the Observatory reported. Government assaults have killed more than 200 civilians in eastern Aleppo since November 15.

"We are strengthening our positions to defend the city and residents, but the aircraft are destroying everything methodically, area by area," said Yasser al-Youssef, of the rebel group Nour el-Din el-Zinki. "The planes have destroyed everything - stones, trees and people - in a systematic policy of destruction."

State media broadcast images of civilians gathering around buses to evacuate a rebel-held district. Food has become scarce in the area, and the aid group Doctors Without Borders has reported that relentless airstrikes by regime forces and allied Russia have left eight out of nine hospitals no longer functioning.

Syria's civil war began in 2011 after the government brutally put down protests against the regime of President Bashar al-Assad. In the intervening five years, it has evolved into a complex multi-front conflict involving different factions and foreign powers. The war has killed more than 300,000 people and displaced more than half the population - at least 11 million people.

Nearly 500,000 children are cut off from food and medical aid and live under siege conditions in Syria, according to UNICEF - a number that has doubled in less than a year. Many spend days underground; hospitals, schools and homes remain vulnerable to aerial bombardment.

"Children are being killed and injured, too afraid to go to school or even play, surviving with little food and hardly any medicine," said UNICEF Executive Director Anthony Lake.

An inquiry by the Organization for the Prohibition of Chemical Weapons and the UN found that government forces have used chlorine barrel bombs against civilians. Syrian authorities have denied using chemical weapons in the conflict.

John Bolton, former National Security Advisor for Donald Trump, calls for the fall of the Iranian regime in DW interview 7m ago

Record German debt due to pandemic, but less than expected 3h ago