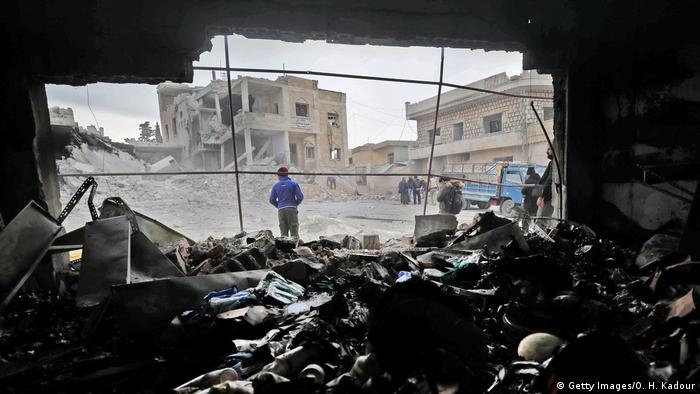 Just over 100 civilians lost their lives in the war in Syria in March. This was the lowest number of civilian casualties reported in a month since the war began in 2011, a human rights group reported Wednesday.

The Syrian Observatory for Human Rights, a Britain-based war monitor, said that 103 civilians were killed in March. 51 people were killed in airstrikes or shelling carried out by the Syrian regime, the rights group said.

Other deaths were attributed to ground explosives, torture and mysterious "assassinations" as well as one execution carried out by a jihadist group.

The death toll includes nine children under the age of 18 as well as 16 women. Just over 500 total war-related fatalities were recorded in March, with the figures including fighters of all factions.

The civilian death toll in March was less than half of what had been reported in February when regime forces carried out heavy offensives against one of the last rebel holdouts. The observatory reported 275 deaths that month.

Over 380,000 people have been killed in the bloody conflict that recently entered its tenth year.

Read more: Idlib diaries: Before and after Syria's ceasefiire

The highest monthly civilian death toll was reported in July 2016, when battles raging in the northern province of Aleppo left 1,590 dead.

Fighting stopped in the northwestern part of the country earlier in March this year when Russia brokered a ceasefire between the Assad regime and rebel and jihadist fighters.

Nearly a million people have been displaced by Russian-back fighting that has taken place in the northwestern province of Idlib, a rebel stronghold, since December.

The United Nations has called for a nationwide ceasefire in order to deal with the threat of coronavirus. Aid groups fear a health disaster should the deadly respiratory disease begin spreading through crowded displacement camps and regime prisons.

The war monitor, which follows deaths and war crimes in the country with the aim of bringing the conflict to an end, also called for international players to step in.

"Despite all the attempts to find solutions… and despite the low intensity of killing due to the international desire to seek a solution…the killing and fighting continues without peace," it said in its report.

"We call for the international parties once again to work hard and make their utmost efforts to stop the bloodshed of the Syrian people, who faced tyranny and injustice to reach a state of justice, democracy, freedom and equality."

Reporters at the TV show "Yalla Nehna" for Syrian children are receiving support in the form of training and consulting. DW Akademie's workshops for video journalists are funded by Germany's Federal Foreign Office. (04.11.2014)