Hours after an alleged chemical attack, the Russian army brokered a deal to allow rebels and civilians to safely abandon Douma. The evacuation brings the Syrian army one step closer to recapturing all of eastern Ghouta. 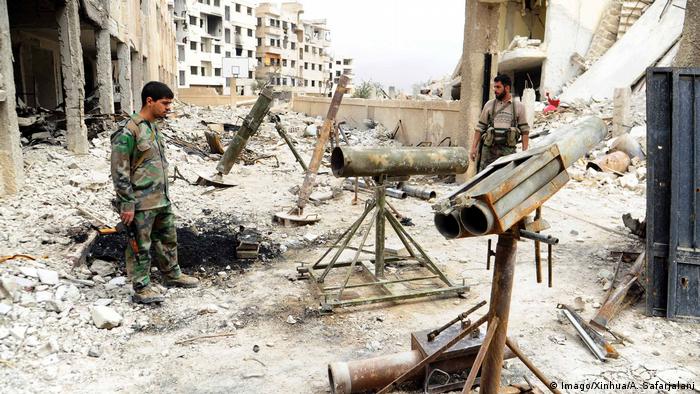 Civilians and rebel fighters began a new round of evacuations on Sunday out of Douma, the last opposition-held enclave within the besieged Damascus suburb of eastern Ghouta.

The evacuations were to take place just hours after aid organizations said that more than 70 people had been killed in an alleged chemical attack in Douma. Syria and Russia, Assad's ally in the fight, have denied carrying out a chemical attack, but the incident has drawn wide condemnation across the international community. Early Monday state-run media in Syria reported a missile attack on a military airport in Homs.

Major General Yuri Yevtushenko, head of the Russian military's Reconciliation Center in Syria, confirmed on Sunday that a convoy of 100 buses had entered Douma to begin the evacuation.

Yevtushenko explained that the Russian army had struck a deal with the rebel group Army of Islam to withdraw about 8,000 of its fighters and some 40,000 family members.

Syria's state news agency SANA reported, citing an unnamed official source, that under the agreement, all departed fighters will head to the opposition-held town of Jarabulus in northern Syria.

In return, the extremist group agreed to release thousands of people that it currently holds in captivity.

The deal is said to be implemented in 48 hours, SANA added without adding any other details, while Army of Islam (also known as Jaish al-Islam) has not yet commented on the agreement.

Eastern Ghouta has been the center of a sustained campaign to recapture it by the Syrian military, with Russian support, for the past seven weeks. Sunday's accord would tighten the government's grip on eastern Ghouta and bring it one step closer to reclaiming the whole of the Damascus suburb.