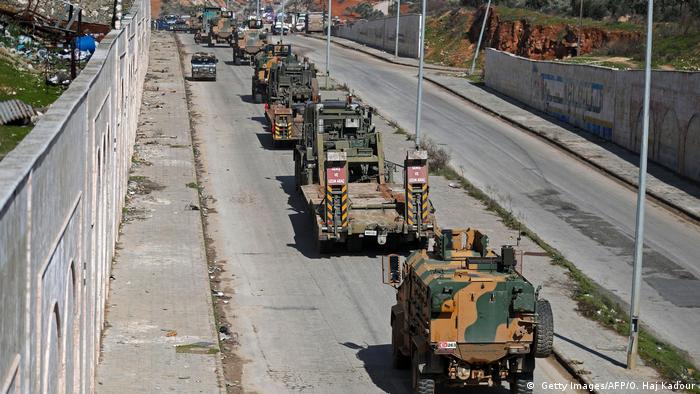 The Syrian army said on Saturday that it had taken control of the strategic northwestern town of Saraqeb as it continues an offensive in the Idlib region, the country's last major rebel stronghold.

News of the seizure was announced by Syrian state television broadcasting live from Saraqeb, located at the junction of the M4 highway, which stretches east from the Mediterranean, and the M5, which brings traffic 300 kilometers (186 miles) north from the capital, Damascus, toward Aleppo.

The junction town's capture capped a weekslong offensive by President Bashar Assad's forces. According to the UN, the operation has forced 580,000 people to flee, many of whom were already displaced, and left 300 civilians dead.

Read more: Idlib — the Syrian region abandoned by the world

Saraqeb, which months ago had had 110,000 residents, has been in large part leveled by bombardment, with many of its inhabitants fleeing the town, according to the Britain-based Syrian Observatory for Human Rights.

"Our aim is to clear the highway," a Syrian commander told state television, referring to the M5, which leads on to Aleppo, whose rebel-held eastern section was captured by Assad's forces back in 2016.

The Observatory said Assad's forces still did not have access to 30 remaining kilometers (18 miles) of Syria's northwestern highway network.

News of Saraqueb's capture comes after a convoy of 430 Turkish military vehicles crossed into Idlib, the province named like its densely packed regional capital, from Friday night, said the Observatory.

That brought Turkey's vehicle count since last weekend to over 1,000, it said.

Turkey has 12 observation posts inside Idlib province, set up under a 2018 truce, in a shrinking rebel area occupied by some 3 million people near Turkey's border.

Some 50,000 rebel fighters, a mixture of jihadis and opponents to Assad's regime, are still in the area, according to Observatory estimates. Rebels inside Idlib are continuing to fight government forces

Turkey's Anadolu news agency, citing a Turkish security source, said the sole mission of the convoy, which was accompanied by commandos, was to reinforce three outposts surrounded by Syria's army.

The Observatory said the Turkish vehicles were on a front line north of Saraqeb.

"In the event of a new attack, a proper response will be given in the strongest manner, based on the right of self-defence," the Turkish Defense Ministry said in a tweet.

On Saturday, a Russian delegation met with Turkish officials in Ankara. Turkey has long urged Moscow to convince Assad to end the offensive.

Last Monday, Turkish soldiers were caught in an exchange of shelling with Russian-backed Syrian troops, leaving more than 20 reported dead on both sides.

"Bashar al-Assad's place in the future ... is not the presidential palace but the International Court of Justice at The Hague," said Altun.

The United Nations and aid groups warn that further Syrian encroachment into Idlib risks creating one of the worst humanitarian catastrophes of Syria's nine-year war.