Voters must decide whether to accept new EU gun laws, including tighter controls for semi-automatic weapons. Switzerland risks dropping out of Europe's open-border Schengen area if the referendum is rejected. 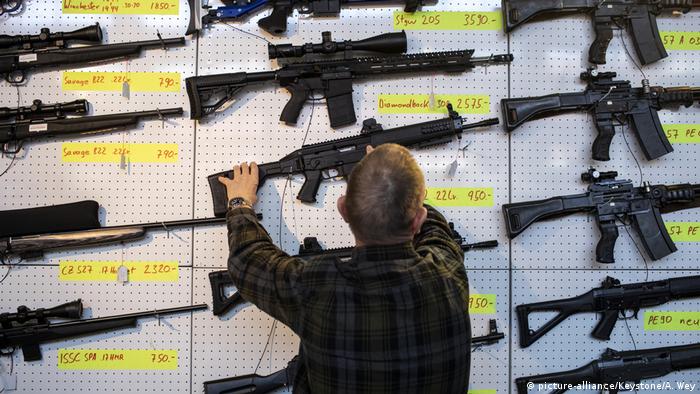 Swiss voters are casting their ballots on Sunday in a referendum on tightening the country's gun laws to comply with rules from the European Union.

Although Switzerland is not an EU member, it could fall out of the open-border Schengen area if it does not change its gun laws — prompting serious backups at its borders and potential consequences for its economy and tourism industry.

What would change under the EU gun laws:

Switzerland's main sport shooting association and others who oppose the measure argue that the new laws could dismantle the country's liberal gun traditions as well as negatively impact target shooters who practice with semi-automatic rifles.

For Rosmarie Quadranti, a member of Switzerland's parliament, the new laws would mean very minimal changes for semi-automatic rifle owners.

"Accepting the changes doesn't threaten sport shooting in any way. Gun owners can continue to practice their sport as before," Quadranti, a member of the Conservative Democratic Party (BDP), told DW.

Operation Libero, a campaign movement in Switzerland, says the potential consequences of no longer being in the Schengen area far outweigh the impact on gun owners.

"We are risking a lot for very little," Janos Ammann, the co-leader of the group's weapons reform campaign, told DW. "Schengen is an example of how freedom and security can be increased through European cooperation."

In the aftermath of the 2015 terror attacks in Paris that killed 130 people, the EU moved to tighten its gun controls to limit access to semi-automatic weapons and close loopholes that gun traffickers have exploited.

As a Schengen member, Switzerland was given two years to accept the changes. Although the changes were approved by parliament, Switzerland's gun lobby, its sport shooting association and the right-wing Swiss People's Party (SVP) pushed for the issue to be put to a referendum.

What happens if they vote "No?"

If the referendum is voted down, the Swiss government has 90 days to find a compromise with the EU and other Schengen area members. A unanimous agreement is needed in order for the country to remain in the open-border system.

Opponents of the gun laws argue that the EU wouldn't want to risk losing Switzerland as an economic and geographic ally. The Swiss government and parliament argue that the EU isn't likely to make an exception for Switzerland, particularly amidst the ongoing turmoil over Brexit.

Should Switzerland lose its Shengen membership, border controls would be reinstated in Swiss airports and on road crossings with its European neighbors, causing potentially massive backups. Swiss police would no longer have access to the Schengen Information System (SIS), a police intelligence database that provides alerts about stolen goods or criminal suspects across Europe.

What happens if they vote "Yes?"

Switzerland would adapt its weapons laws to reflect the changes and it would remain part of the Schengen area and Dublin Agreement.

Switzerland's current gun laws are more relaxed compared to its EU neighbors, although there are certain regulations in place. Swiss citizens and permanent residents over the age of 18 can purchase a gun in Switzerland, but they must first apply for a permit and present a copy of their criminal record.

Citizens from Bosnia-Herzegovina, Kosovo, Turkey, North Macedonia, Sri Lanka, Albania and Algeria are currently not allowed to own guns in Switzerland.

Swiss vote to keep their guns at home

Switzerland has rejected tighter gun controls and will continue to allow citizens to keep army-issued weapons at home. A referendum that sought to have weapons stored in armories instead was rejected. (13.02.2011)