Switzerland to accept Uighur Guantanamo detainees | Europe| News and current affairs from around the continent | DW | 03.02.2010

In the face of Chinese objections, the Swiss government decided Wednesday to allow two Chinese detainees from the US military prison at Guantanamo Bay to relocate to Switzerland. 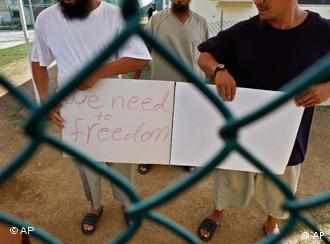 The Uighurs have been held at Guantanamo Bay since 2001

The Swiss government said Wednesday it would allow two Chinese Guantanamo detainees to resettle in northwestern Switzerland, despite objections from China.

Beijing warned the Swiss government in early January that accepting the inmates, ethnic Uighurs and alleged terrorists in China, could sour relations between the two countries.

The Swiss Justice Ministry said it was aware of China's concerns but had decided to grant asylum to the men based on humanitarian grounds, adding that the men didn't represent a security risk.

"Today the Federal Council decided to admit for humanitarian reasons two Uighurs with Chinese citizenship, who have been imprisoned in Guantanamo for years by the United States without being charged with a crime nor condemned," it said.

Justice Minister Eveline Widmer-Schlumpf said Switzerland has a "stable, good relationship with China, and we want to keep it that way."

In January, a Swiss parliamentary committee recommended not to accept the detainees, citing security fears after the attempted bombing of an American airliner on December 25.

The detainees, who are brothers, will be resettled in the canton of Jura. In January, an Uzbek became the first former Guantanamo inmate to be resettled in Switzerland. Widmer-Schlumpf said the country is not planning to take in any further detainees.

Obama under pressure as clock ticks on Guantanamo closure

With the clock ticking on his self-imposed deadline to close the detention camp at Guantanamo Bay by early 2010, US President Barack Obama is under increasing pressure over his ambitious plans to close the prison. (16.11.2009)

The US has issued a second request to Germany to take in prisoners from Guantanamo. But the government says it needs more details before it can make a decision. (11.06.2009)

Several Uighurs held at Guantanamo Bay prison have appealed to the German government for asylum. A remote Pacific island has agreed to accept them but only on a temporary basis. (10.06.2009)