Swiss voters overwhelmingly rejected the idea to give "an unconditional basic income" to all residents. Switzerland is the first nation to hold a referendum on the issue, with supporters worried about the future of jobs. 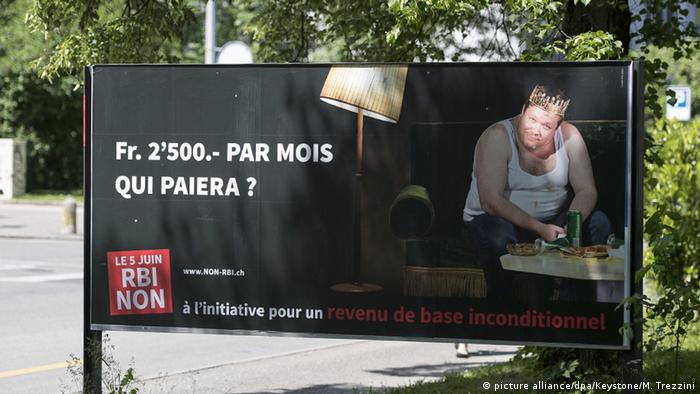 The initiative was defeated with some 76.9 percent of voters against it, according to the final results of the Sunday referendum.

The ballot did not provide a specific figure, but economists projected a minimum of 2,500 Swiss francs ($2,560, 2,225 euros) per month would have been allocated for adults living in the Alpine country.

A German crowdfunding project has been collecting money so that every month a lucky winner gets a basic monthly income for a year. It's a campaign and a social experiment - and it's re-started an old debate in Germany. (06.10.2015)

Children would have been given about a quarter of that amount.

However, the idea also forsees jobless, social and pension payments to be scrapped.

Supporters of the measure said it would promote human dignity and public service. Opponents - including the Swiss government - argued that the proposal would cost too much and weaken the economy.

Switzerland is the first country to hold a national vote on basic income, but other countries such as Finland are considering similar plans.

The referendum arose after supporters garnered more than 100,000 signatures. One of the initiative founders Daniel Häni, a café owner in Basel, admitted defeat, but praised the vote nonetheless.

"As a businessman, I am a realist and had reckoned with 15 percent support, now it looks like more than 20 percent or maybe even 25 percent. I find that fabulous and sensational," he told SRF.

"When I see the media interest, from abroad as well, then I say we are setting a trend."

Supporters threw a party in Lausanne to celebrate the 23 percent of votes they had garnered.

"One out of five people voted for the unconditional basic income, so that is a success in itself," Sergio Rossi, an economics professor and backer of the initiative, told the ATS news agency.

Several neighborhoods in Zurich and Geneva backed the motion, which sparked fierce debate in the country.

The government and nearly all political parties urged the voters to vote 'no,' with many ordinary citizens decrying the initiative as unrealistic.

"I find that it is a real danger that once people just get their basic needs covered society doesn't feel responsible any more to look after the ones who can't really handle the situation on their own", a woman named Meleanie said after voting against the proposal.

The results also showed that almost 67 percent voted in favor of speeding the country's asylum process. The aim is to handle a case in 140 days or less, compared to some 400 days at the moment.

Also, over 62 percent of voters backed the proposal to allow genetic testing of embryos during in vitro fertilization, if either of the parents carries a serious hereditary disease.