The Swiss central bank has shocked financial markets by ending its bid to hold down the value of the franc against the euro. The surprise announcement sent the safe-haven Swiss currency soaring and shares plunging. 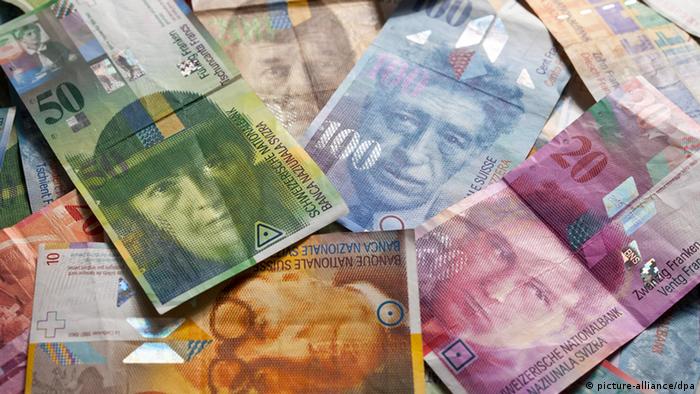 In a surprise announcement on Thursday, the Swiss National Bank (SNB) said it was ending its policy of trying to keep the value of the Swiss franc at a minimum exchange rate of 1.20 francs for one euro.

Following the announcement, financial markets were in an uproar. The Swiss franc appreciated immediately by almost 30 percent against the euro, breaking past parity and trading at 0.85 francs per euro before dropping back to about 0.98 in later trading.

The exchange rate cap policy had been introduced by the SNB in September 2011. It was a reaction to a side effect of the eurozone debt crisis, which had sent investors scurrying to the Swiss franc as a safe-haven currency. That drove the franc to levels that made life very difficult for Swiss exporters.

In a statement, SNB noted that the country's economy had since "adjusted to the new situation."

"While the Swiss franc is still high, the overvaluation has decreased as a whole since the introduction of the minimum exchange rate," the SNB said.

The reaction of the Swiss stock market didn't reflect this sanguine view. Swiss shares were pummelled, with the country's SMI index falling by 10 percent shortly after the announcement - the biggest one-day fall in at least 25 years.

Two major Swiss banks, Julius Baer and UBS, were down 13 and 11 percent respectively.

"The explanation that the overvaluation has decreased has been wiped out within seconds," Bank Sarasin economist Alessandro Bee told the news agency Reuters. "Let's hope that this is an extreme move that will normalize soon."

The SNB's move didn't have repercussions just in Switzerland. The financial shock slammed into Poland as well. About 700,000 households there have mortgage debts denominated in Swiss francs. With the Polish currency, the zloty, having lost about twenty percent of its value in one fell swoop, these debtors could see their mortgage payments - for many families, it's their biggest monthly expense - go up by the same proportion.

Watch out, this is big

Nick Hayek, CEO of Swatch, the biggest watchmaker in the world, said SNB's move hit stock market like a tsunami.

Switzerland-based Swatch exports nearly all its products. The cap of 1.20 euros per Swiss franc had helped the company avoid overpricing its watches in foreign markets. With the cap gone, markets were quick to revalue the company's shares downward.

A new game plan is needed

Swissquote analyst Ipek Ozkardeskaya told Reuters that she expected the "panic situation" in the franc to continue until SNB unveiled "a new game plan." She also said that an "accidental break" of the exchange rate floor would have been more serious for SNB credibility.

In recent months, SNB massively intervened in foreign exchange markets, buying vast quantities of euros to prevent the franc from appreciating. Upward pressure on the Swiss currency appeared to be caused in part by investors fleeing to safety amid the Russian ruble crisis.

In an effort to discourage excessive investment in the currency, SNB also announced Thursday that it would slash its already negative interest rate on certain bank deposits by a further 0.5 percent - which means it will now charge the relevant account holders 0.75 percent per annum just to hold francs.

The negative interest rate policy, which was first introduced just a month ago, in December, applies only to demand accounts with balances above ten million francs.