His award-winning designs include the Therme in Vals, the Kunsthaus Bregenz and the Kolumba art museum in Cologne. Peter Zumthor is the first foreign architect to be honored by the Association of German Architects.

Admittedly, the Swiss star architect Peter Zumthor is used to awards: The Pritzker Architecture Prize and the Praemium Imperiale are just two of the world's most prestigious distinctions he has already been given.

He is now receiving a German accolade, the "Großer BDA Preis" for his lifetime achievement.

The award is given out every three years by the Association of German Architects (BDA) to honor the exceptional work of an architect or urban planner. Former prize winners include Ludwig Mies van der Rohe, Günter Behnisch and Oswald Mathias Ungers.

The jury praised Zumthor's unique approach: "His consequent focus on light, material and space and his great quality standards for details give his work a timeless relevance. As an uncompromising artist, Zumthor frees himself from external constraints and overrides standards, techniques and procedures that are said to be without alternative." 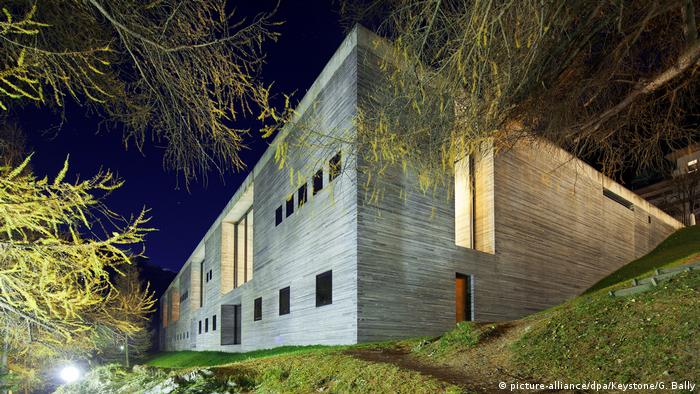 An exterior view of the thermal baths in Vals

The 74-year-old architect is renowned for his design of the cave-like Therme Vals in Switzerland; the Kunsthaus Bregenz, a glass and concrete cube overlooking Lake Constance in Austria; and the Kolumba art museum in Cologne. He has also designed one of the temporary pavilions of the Serpentine Gallery in London, a series presenting the works of the world's leading architects.

Born in Basel, Switzerland, Zumthor first trained as a carpenter before studying design and architecture in Basel and New York. He is recognized for his keen sense of detail, his timeless architectural style and meticulous selection of materials.

The BDA Prize 2017 will be presented to Peter Zumthor on July 1 in Munster.

Berlin-based architect Diébédo Francis Kéré has unveiled his Serpentine Pavilion in London's Kensington Gardens. He is the first African to be commissioned for the project created annually by renowned architects. (21.06.2017)

Three Catalonia-based architects have been named as the 2017 winners of the prestigious Pritzker Prize. The jury praised the group's ability to create modern works that are deeply rooted in the local landscape. (01.03.2017)