Sweden has ended a military deal with Saudi Arabia over human rights issues. The break comes after the Swedish Foreign Minister Margot Wallström was allegedly prevented from making a speech at an Arab League meeting. 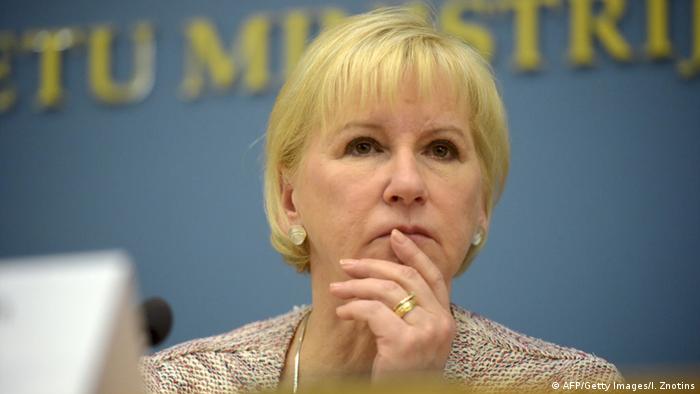 Sweden announced that it would not be renewing its military cooperation agreement with Saudi Arabia, effectively ending the 10-year-old defense ties due to mounting concerns over rights issues.

"It will be broken off," Prime Minister Stefan Löfven said on Swedish public radio. The Social Democrat premier's comments came a day after Sweden's Foreign Minister Margot Wallström accused Saudi Arabia of blocking her speech at an Arab League meeting in Cairo.

The government made the official announcement Tuesday evening. The trade agreement, which includes the export of military arms to Saudi Arabia, which is the third largest non-Western buyer of Swedish arms. According to the AFP news agency, Riyadh bought equipment worth 338 million kroner (37 million euros, $39 million) in 2014 alone.

Relations between the two countries have grown frosty in the last 24 hours after Wallström said Riyadh had stopped her from making her opening address to the meeting on Monday because of her stance on human rights.

Wallström had been invited as an honorary guest to the Arab ministers' meeting in praise of her government's decision to recognize Palestine in October.

In response, Arab ministers at the Cairo summit issued their own criticisms. "The ministers have voiced their condemnation and astonishment at the issuance of such statements that are incompatible with the fact that the Constitution of the Kingdom of Saudi Arabia is based on Sharia," read a statement issued by the ministers following their meeting.

Wallström's press secretary Erik Boman told Sweden's English news site The Local that the Arab League's statement "should be interpreted as a way of Saudi Arabia trying to save face".

After talks with King Salman in Riyadh, Germany's Vice Chancellor Sigmar Gabriel has said that the imprisonment and public lashing of blogger Raif Badawi, convicted of "insulting Islam," is testing bilateral ties. (08.03.2015)

Two top German politicians have called for a rethink on weapons exports to Saudi Arabia, shortly before Economy Minister Sigmar Gabriel - once a critic of the sales himself, when in opposition - visits the monarchy. (07.03.2015)