Suspected gang members in Mexico have confessed to killing more than 40 missing students, according to the country's attorney general. Investigators are scouring a site where it is thought remains may have been dumped. 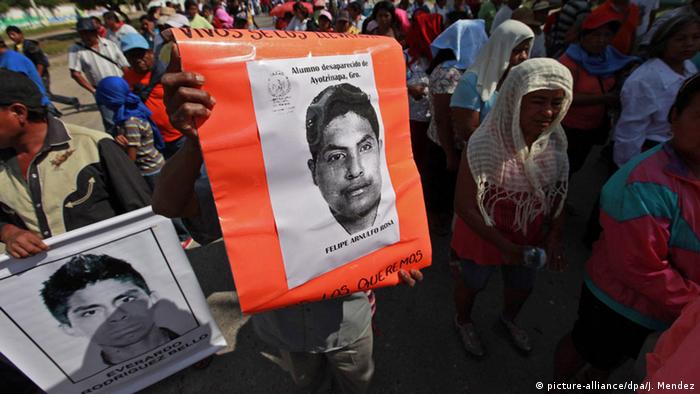 Suspected gang members in Mexico have confessed to killing more than 40 missing students, according to the country's attorney general. Investigators looking for possible remains are examining one site where it is thought they may be.

Attorney General Jesus Murillo said Friday that gang members detained over the disappearances of 43 students in the state of Guerrero had admitted to killing a large group of people.

"I am angry, sad and Mexican society is, too," said Murillo, delivering the news at a meeting with relatives of the missing students.

Murillo said three newly detained suspects had admitted setting fire to the group, some of whom were said to have still been alive, in a rubbish dump near the town of Iguala. The students went missing on September 26 after clashing with police, although six bodies were discovered in the immediate aftermath.

Investigators say Iguala police took the students to Cocula, where they were loaded into a dump truck and handed over to the Guerreros Unidos gang. Information from the suspects appeared to confirm the sequence of events, the attorney general said.

The disappearances have led to a wave of protest across the country, with demonstrations turning violent in Iguala and the state capital, Chilpancingo.

Authorities on Friday told relatives of the missing students that they had found six bags of unidentified human remains. The remains were said to have been found near a river in the vicinity of Cocula.

Several clandestine graves have previously been found further away in mountains of Guerrero state, but the students' families have been left frustrated. Forensic experts last week combed a gully below the dump some 13 miles (20 kilometers) from Iguala.

Relatives have been camped at their school, the Rural Normal School of Ayotzinapa, since the disappearances.

Former Iguala Mayor Jose Luis Abarca - described by authorities as as a "chief suspect" - and his wife Maria de los Angeles Pineda were on Tuesday found to be hiding in a neighborhood of Mexico City after nearly a month on the run. Prosecutors claim Abarca ordered police to confront the students, fearing they intended to disrupt an event that was being hosted by his wife.

Germany welcomes bid to halt US troop withdrawal 12m ago