Suriname President Desi Bouterse has been sentenced to 20 years in prison for the 1982 murder of 15 political opponents. The South American country is now on edge over what happens next. 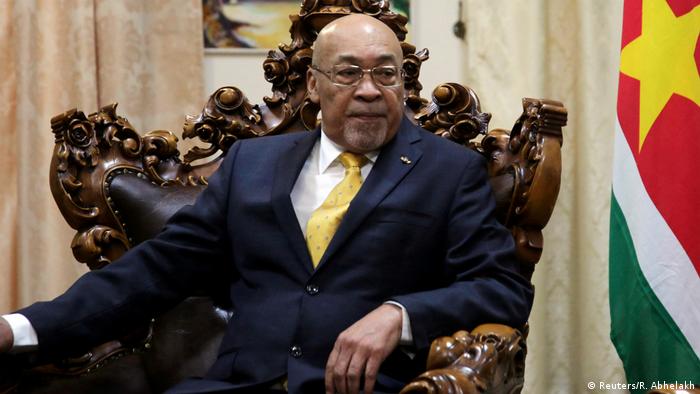 A military court in Suriname on Friday convicted President Desi Bouterse of murder for the execution of 15 opponents in 1982, plunging the South American country into political uncertainty.

Opposition parties called on Bouterse, who is on a state visit to China, to step down. He was expected to return home on Saturday or Sunday.

The 74-year-old leader was sentenced to 20 years in prison, but the military court did not issue an arrest warrant. Under Surinamese law, he cannot be arrested until all appeals have been exhausted.

After the court decision, the government asked Suriname's 560,000 people to remain calm.

As a junior military officer, Bouterse seized power in a coup in 1980, five years after Suriname gained independence from the Netherlands. He stepped down in 1987 under international pressure in a move that led to a democratic election, only to briefly seize power again in 1990.

He later left the army and took office again in 2010, following democratic elections won by his National Democratic Party (NDP). He secured a second term in 2015.

What did the court find?

The court ruled that Bouterse had overseen what is known as the "December killings," in which soldiers abducted 16 opponents, among them prominent journalists, academics and military officers.

All but one of the detainees was killed at a colonial fortress in the capital, Paramaribo. The sole survivor — a union leader — testified against Bouterse.

What led up to the decision?

The court decision marks a turning point in a trial that began in 2007, when Bouterse accepted "political responsibility'' for the killings but insisted he was not present.

Bouterse and the NDP have repeatedly sought to obstruct the trial. Shortly after taking office in 2010, the NDP-controlled National Assembly granted him amnesty, which was overturned by the constitutional court.

Then in 2016, the president asked the attorney general to halt the legal proceedings against him, but the court ruled against the move because the trial had already started.

Angelic del Castillo, head of the opposition Democratic Alternative '91 party, said Bouterse had "disqualified himself" and demanded he immediately resign.

In a joint statement, the diplomatic missions of France, Germany, the Netherlands, Spain, the United Kingdom and the United States called for the final verdict regarding the killings to be "implemented and upheld in accordance with the rule of law."

"The integrity and independence of the Judiciary is a pillar in Suriname society," they said.

In 2009, a Dutch court sentenced Bouterse to 11 years in prison in absentia for drug trafficking. However, his 2010 election victory protected him from being extradited under an Interpol warrant.

In 2015, his son, Dino Bouterse, was sentenced to more than 16 years in prison in the United States after being convicted of drug smuggling and trying to help the Lebanese militant group Hezbollah establish a base in Suriname. He had previously been picked to run Suriname's counterterrorism unit.

A Suriname judge in 2005 convicted Dino of trafficking arms, drugs and running a gang.

Jung Joon-young and Choi Jong-hoon were jailed for assaulting drunk, unconscious women. The high-profile case highlighted once again the dark side of South Korea's entertainment industry after a series of sex scandals. (29.11.2019)

The leader of the opposition in Peru has been released from jail after spending more than a year there pending trial. She was accused of receiving illegal campaign contributions from a Brazilian construction firm. (30.11.2019)