Jung Joon-young and Choi Jong-hoon were jailed for assaulting drunk, unconscious women. The high-profile case highlighted once again the dark side of South Korea's entertainment industry after a series of sex scandals. 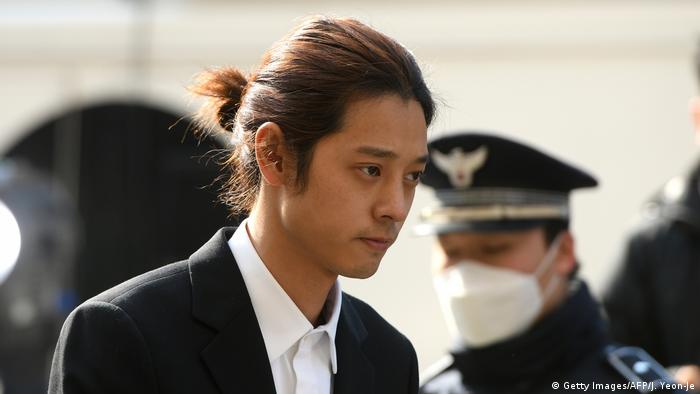 A South Korean court on Friday sentenced two K-pop stars to prison after finding them guilty of gang rape and distributing a sex video without consent. It is the latest in a string of scandals to hit the Korean popular entertainment industry.

"Jung and Choi took part in gang rape of victims who were intoxicated and unable to resist," according to the verdict. The crimes against two different victims occurred on two occasions in 2016.

Jung was also convicted of secretly filming sex with women and sharing them with friends in a group chat.

"The defendants are well-known celebrities and friends, but the chat they've had showed that they simply considered women as objects of sexual pleasure, and committed crimes that were extremely serious," Judge Kang Seong-soo said as he handed down the verdict.

"Strict punishment is inevitable as the damage inflicted has not properly been recovered and the victims demand harsh penalties."

Both men wept as the verdict was read.

Dark side of K-pop

Their case is one of several that have emerged to show the dark underbelly of the South Korean entertainment industry that is popular across Asia.

On Sunday, K-pop musician and actress Goo Hara was found dead at her home in Seoul after she said her former boyfriend had threatened to release a sex video of her.

In October, K-pop star Sulli was discovered dead at her home. The 25-year-old had spoken out against being targeted by malicious online rumors and allegations.

Lee Seung-hyun, a former member of K-pop group Big Bang, is currently on trial over allegations he paid for prostitutes for foreign businessmen to attract investment to his business.

The body of 28-year-old Korean pop singer Goo Hara has been discovered at her home in Seoul, according to police. The news follows the recent death of her close friend Sulli, another K-pop star and actress. (24.11.2019)