An attack by a suicide bomber on an election rally in Pakistan has killed nine people and wounded dozens more. The Taliban claimed responsibility for the attack, but said they had missed their mark. 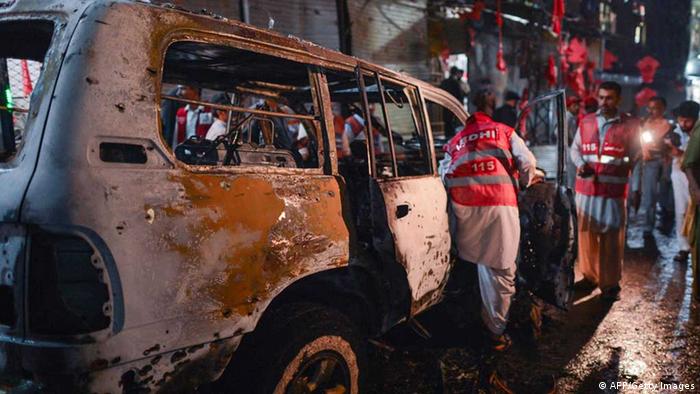 The campaign rally, thrown for senior members of the Awami National Party (AWP) including Ghulam Ahmed Bilour, took place on Tuesday in Peshawar in the northwest of Pakistan. Ghulam Bilour, railway minister in the outgoing government, survived the bombing with minor cuts and bruises.

After the attack, the Taliban claimed responsibility but apologized to Bilour, who was not their intended target.

The chief of Pakistan's right-wing Jamaat-e-Islami party Munawar Hasan told DW 'nobody knows the Taliban better than Pakistan' and that if his party succeeded in upcoming election, it would make peace with the militants. (11.04.2013)

"We apologize to Ghulam Bilour because we announced an amnesty for him," a Taliban spokesman told the AFP news agency. "Our target was Haroon Bilour."

Ghulam Bilour's older brother, Bashir Bilour, was assassinated by the Taliban at the end of last year. Haroon Bilour - the intended target of the attack - is Bashir Bilour's son. Ghulam Bilour's 'amnesty' stems from his offer of a $100,000 reward for anyone who killed the filmmakers behind a film produced in the US that was considered by many to be insulting to Islam.

The ANP has received threats from the Taliban ahead of upcoming elections in Pakistan, scheduled for May 11. The vote is seen as a key milestone for Pakistan as it represents the first democratic transition of power in the country's modern history.

The Taliban has also issued death threats against former president Pervez Musharraf, who returned from four years of exile to run in the elections. However, a court in Pakistan has disqualified Musharraf from running in the country's upcoming parliamentary election. His lawyer said he would appeal the court's decision.