Think of a neo-Nazi and you think of a man with a shaved head, pummeling a foreigner. But that image is outdated, some social researchers say. She may well be a woman -- and a feminist, to boot. 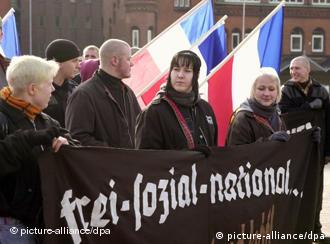 Women are gaining in importance in far-right ranks, a new study shows

At a recent conference of the Friedrich Ebert Foundation in Berlin, researchers examined the role of the sexes in the extreme right wing. Their findings: there may well be a preponderance of young male neo-Nazis, but there are women in their ranks, too. And they are gaining in importance.

Renate Bitzan, of the University of Göttingen, has formed the Research Network on Women and Right-Wing Extremism. Her objective is to look into what sort of women join the far-right -- and why.

"Generally, it is not the image of women in the scene that draws women to be a part of it in the first place," Bitzan said. "It is their ideology. Like the men, they are mainly attracted by ideas of togetherness, race and nation. Relations between the genders is of a lesser importance, so to speak."

Producing the pure race, and raising it right

Nonetheless, she said, women tend to be assigned certain roles. And that is first and foremost that their job is to produce the purest possible offspring for the race, and raise them in the national spirit.

The woman's second-most-important job is to take part in the political struggle, as a "comrade" to the men, Bitzan said. 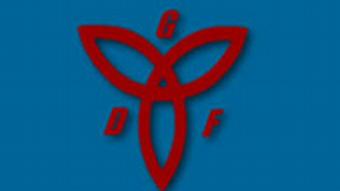 The GDF's logo is based on an ancient Germanic symbol

There are a wide range of approaches to combining these two roles, ranging from a strong identification to the mother-role to the creation of a so-called "national feminism."

Groups like the nationalistic, right-wing Gemeinschaft Deutscher Frauen (Organization of German Women) promotes not only political activism but also strongly advocates motherhood and uses populist rhetoric. On the other hand, groups like the Mädelring Thüringen (Thüringen Girl Gang) exist to combat the patriarchy and political immaturity.

"Today's right-wing woman is not necessarily only the protector of hearth and home, but also an equal partner in creating a public life, which includes all areas of life and career equally," Bitzan said.

Bitzan contends that this reflects a change of focus among right-wing women. Motherhood may still play a role, but independence, personal development, competency and challenging the patriarchy are more important.

But while the women may be exactly as racist, anti-Semitic and nationalistic as their men, in keeping with gender clichés that also fit outside of the right-wing scene, they tend to leave violent public demonstrations to their men.

"Most frequently, they are included in mixed-gender groups -- parties, clubs, fellowships," Bitzan said.

Some of them are members in right-wing women's groups, which have seen a boom in the past years, the expert claims.

"This could mean that the women themselves are starting to see cooperation among women as an attractive thing in itself," she said. 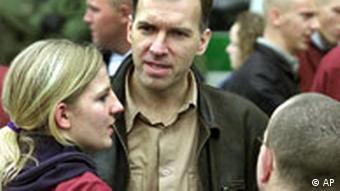 She looks like the girl next door -- and she's attending a neo-Nazi rally.

One worker at a mobile youth clinic in Ostprignitz, a depressed area of eastern Germany, took a shot at explaining the attraction young women feel toward such right-wing groups.

"The girls want to have fun, they are totally bored -- especially in the countryside," said the worker, who did not give her name. "They are looking for something really attractive. That is the far-right scene."

As part of the far-right, the girls feel strong. They can terrorize people, and have the feeling they are influencing society -- the same thing that draws young men, the worker added.

There is a long-held misconception that young women are either not part of the scene or are just "fellow travelers" with their truly active male counterparts. This means outreach clinics and social workers are "overrepresented" in terms of being geared toward young men, said Esther Lehnert, a spokeswoman for the Mobile Outreach Against Right Extremism in Berlin.

She warned that young women need to be taken seriously.

One way to reach young women in the scene is to go through the schools, said Gabi Elverich, of the German Youth Institute in Halle. But that is a hard nut to crack, because schools don't deal with racism and discrimination at all, she said.

"Teachers aren't trained to deal with it," she said. "There are few examples in practice. I think it is the area where there is a lot of need for information, where early intervention could help."

Is right-wing extremism compatible with feminism? Please send your name and country with your reply.