Student rally crackdown exposes Myanmar′s struggle with democratic transition | Asia | An in-depth look at news from across the continent | DW | 11.03.2015

Over 100 people were recently arrested in Myanmar after police cracked down on a student rally calling for education reform. DW examines what lies at the root of the clashes, which have sparked international concern. 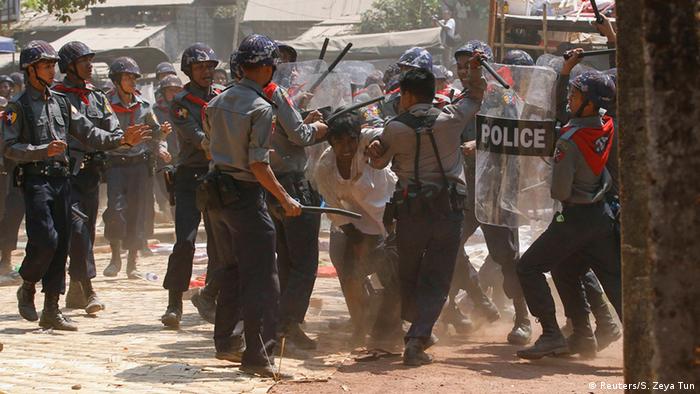 The violence erupted on March 10 in the town on Letpadan, about 140 km (90 miles) to the north of Yangon, when a student-led rally against an education law was blocked and forcibly dispersed by the police.

According to eyewitness accounts, students, monks and journalists were beaten with batons and sticks by security forces and then dragged into trucks. More than 100 people were arrested, sparking condemnation from human rights groups, among others.

Amnesty International's (AI) Rupert Abbott condemned the police response to the protests as disproportionate, arguing that Myanmar police also beat helpless people who had fallen to the ground, which amounts to "cruel, inhuman or degrading treatment or punishment under international law."

"Eyewitness accounts and images of police beating fleeing demonstrators with batons are a stark reminder of just how repressive the climate still is for activism in the country," said Abbott. David Mathieson, senior Myanmar researcher at Human Rights Watch, told DW the latest clashes mark a turn in police tolerance for protests, and urged authorities to permit peaceful demonstrations, regardless of any breaches of the flawed peaceful assembly law. 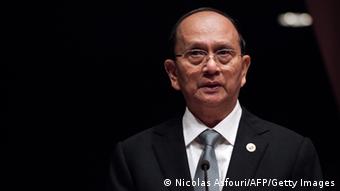 A day later, state media announced an inquiry into the incident, as families of those arrested sought news of their loves ones. This is the second time in recent days that the authorities have suppressed student-led rallies in the Southeast Asian nation, triggering criticism from both the United States and the European Union, which said the clashes showed the country's need for further reform.

But what lies at the root of the protests? Phuong Nguyen, a Southeast Asia expert at the Washington-based Center for Strategic and International Studies (CSIS), explains that students in Myanmar have been peacefully protesting outside Yangon for months now demanding that the government amend the National Education Law which was passed in September 2014 with little student or wider academic input.

"The most important things they want are greater academic freedom, greater autonomy in the teaching of ethnic minority languages, and for local institutions, and larger government spending on education," Nguyen told DW.

Tens of thousands have fled clashes between troops and ethnic rebels in northeastern Myanmar, an area facing a state of emergency. DW examines the roots of the conflict and what it means for the government's peace plans. (19.02.2015)

She notes that students are demanding a greater say in education policies and legislation; greater autonomy in educational affairs; the right to freely establish and operate student and teacher unions; the right to teach in vernacular languages; an allocation of one-fifth of the national budget to fund education; and free compulsory education up to middle school.

At one point, government officials sat down with student leaders to hash out a joint agreement to amend the law, but protests escalated again when the students accused the government of going back and altering the agreement. As a result, the students insisted on marching into Yangon to show their discontent and authorities responded by deploying police and plainclothes vigilantes to crack down on them.

Dr. Kuok points out that the issue of education and educational reform is a particularly thorny one given Myanmar's history. She highlights that students have been responsible for leading many of the country's main protests, such as in 1988, 1996, and 1998. They were also involved in the monk-led Saffron Revolution of 2007. "For 10 out of the 12 years between 1988 and 2000, Yangon's universities were closed," said the expert.

Myanmar once had one of the best university systems in Southeast Asia. For instance, at independence, the country had the highest literacy rate amongst countries in the former British Empire, with Yangon University (formerly Rangoon University) being one of Asia's most prestigious.

But the quality of education deteriorated severely during five decades of military rule. As Myanmar opened up in recent years, some elites are once again afraid that empowering the youth through greater academic freedom and improved educational standards could potentially lead to another 1988-style uprising, when thousands of students led large street protests to call for change in the regime's social and economic policies, said Myanmar expert Nguyen.

HRW's Mathieson has a similar view: "These students have inherited a devastated system of education that is the fault of the military since it seized power in 1962 and they want a better future - they want a voice for education standards and student rights."

The researcher added, there has been no agreement because the government has not grasped the simple fact that genuinely democratic and reformist governments listen to students. The government reports that it spends around 10 percent of the national budget on education - the least among ASEAN countries - while students want at least 20 percent of the budget allocated to education in five years. 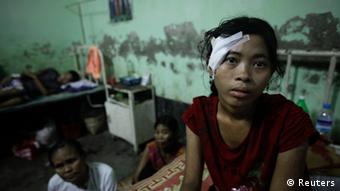 Myanmar is also dealing with longstanding religious and communal conflicts

The recent clashes have also sparked fears of a return to the military junta's authoritarian rule which lasted until 2011 when a semi-civilian government took power. "The excessive use of force by the police, at best, indicates poor training and, at worst, suggests a possible return to the heavy-handed approach of Myanmar's not-so-distant past," Dr. Kuok argued.

In the right direction?

Myanmar's current government has earned international praise over the past years for undertaking political and economic reforms that have resulted in the lifting of most Western sanctions. In fact, a survey published by The Asia Foundation last December found that a majority (62 percent) of respondents believe things in Myanmar are going in the right direction.

But the nationwide poll also revealed a limited knowledge among the public regarding government institutions and their functions, a low level of social trust, a high degree of political polarization, and deep apprehension about economic opportunities.

"Overall, we see that the public is still quite far removed from the government and this is a challenge that will need to be addressed in order to sustain and deepen democratic institutions and practices." Kim Ninh, The Asia Foundation's country representative in Myanmar, told DW.

The crackdown on the student rallies also comes at a critical time for President Thein Sein's administration, as it deals with longstanding religious and communal conflicts and prepares for a presidential election later this year.

According to Bernt Berger, Head of the Asia Program at the Stockholm-based Institute for Security and Development Policy (ISDP), all these developments reflect a general problem in Myanmar's transformational process. "Mainly the younger generation and also opposition activists expect a faster process in Myanmar's transformation. The emergence of an expectation gap between the gradualist approach of the government and the demand for instant democracy is triggering all kinds of conflicts."

CSIS expert Nguyen has a similar view. She argues that the police's use of excessive force to deal with protesters shows that the reformist government is still struggling with how to address very basic democratic processes and rights, while aspirations of young people for their country's and their own futures are too high. "Meanwhile, neither side trusts the other side," said Nguyen. 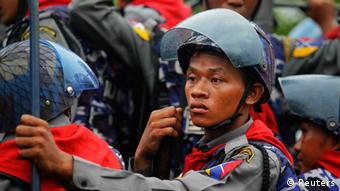 The transformation process in Myanmar is also affecting the country's police

This transformation process is also affecting the police which have committed to change and received funding for training from the European Union. "This violent departure from the norms imparted from EU trainers marks a dilution to the commitment to make the police more professional and rights respecting. But in many ways, this redoubles the case for support for professionalizing the Burmese police to ensure rule of law," Mathieson told DW.

To address the immediate issue of the protests and clampdown, Dr. Kuok maintains that the Myanmar government must condemn the excessive use of force and take firm action against those responsible. It will also have to meet students' broader concerns. "A failure to properly handle these protests risks them snowballing into broader ones concerning the government's ability and willingness to bring about positive and lasting change," said Dr. Kuok.