Riot police have clashed with thousands of anti-government protesters in Kosovo's capital Pristina. The protesters demanded a dismissal of a Serb minister and a government takeover of a mine claimed by Serbia. 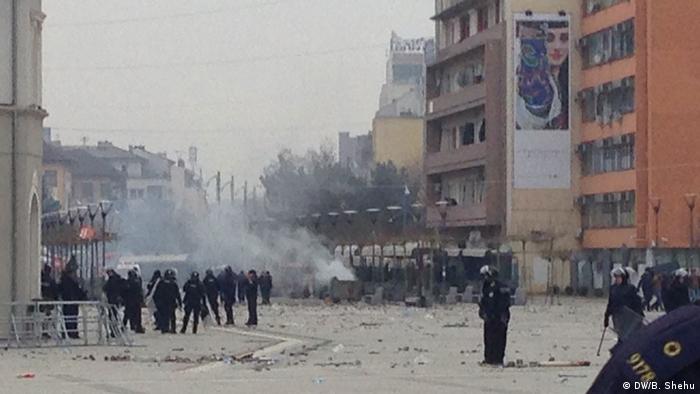 Police fired tear gas and used water cannons against several thousand supporters of the nationalist "Self-Determination" movement, who had gathered at the center of Pristina on Tuesday. At least 80 people, including 50 policemen, were injured in the street battle. According to the police sources, two of the police officers had sustained serious injuries.

Ambulances were at the scene and more then 120 protesters were arrested.

The clashes broke out after the protesters had attempted to break into the central government building, and had begun throwing stones and Molotov cocktails at the security forces.

The protesters were demanding that a Serb minister in the Kosovo government, Aleksandar Jablanovic, be sacked. The minister had sparked outrage when he called a group of Albanians "savages" for trying to stop Serb pilgrims from visiting a monastery in predominantly Albanian Kosovo. The group had claimed that some of the visitors were Serbian "war criminals."

The opposition parties, who organized the Tuesday protests, also demanded that the government take control of the huge Trepca mining complex. Trepca has been under charge of a privatization body created by the United Nations since the end of the war with Serbia in 1998-1999.

The government of Prime Minister Isa Mustafa had promised take control of the mine, but changed course after a sharp response from Serbia which claims it owns three-quarters of the complex.

Western countries have also signaled disagreement, fearing that the intended move would harm the European Union-led dialogue between Belgrade and Pristina.

Serbian forces were pushed out of Kosovo by NATO bombing in 1999, and some 5,000 NATO troops are still stationed there in Kosovo, alongside several hundred EU police officers.

Kosovo's independence, proclaimed in 2008, remains disputed by Serbia. The country is also burdened by corruption and poverty, with the official unemployment rate at 45 percent.