Strange Bedfellows: Radical Leftists for Bush | Germany | News and in-depth reporting from Berlin and beyond | DW | 25.08.2006

Among the German far-left, one subgroup called the anti-Germans holds some contradictory views. Most call themselves communists, yet loudly proclaim their support for Israel and George W. Bush. 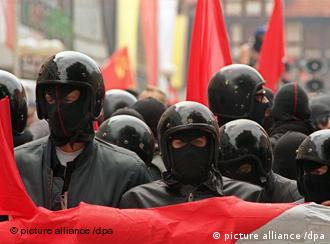 When it comes to the anti-Germans, the political Big Tent theory appears to have become fact: groups that generally can't bear to be in the same room sometimes unite for a common cause.

That was on show recently in western Berlin, where thousands had gathered to show their support for Israel during the recent conflict with Hezbollah militants in Lebanon. Many of the demonstrators were members of Berlin's Jewish community or the conservative Christian Democrats.

However, there were some there who belonged to the far-left and sported all the accoutrements of those who are known as Autonomen in Germany -- black clothing, buttons or patches with political slogans or insignia, and often scarves, sunglasses or baseball caps to make them harder to identify. 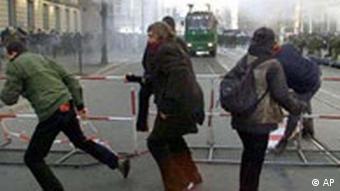 But this time they hadn't come to disrupt the demonstration, shout out anti-Zionist slogans or get into tussles with police, as they often do. The group of anti-Germans had actually organized the demonstration under the slogan "unconditional solidarity with Israel," one of the core positions of their movement.

Such a stance puts the group firmly at odds with the majority viewpoint of Germany's far-left movement, which since the 1970s has been overwhelmingly pro-Palestinian and very critical of Israeli policy. Completing the philosophical break is the support of many anti-Germans for US President George W. Bush, who for the traditional far left is anathema.

"It has to do with George W. Bush's conception for a new Middle East, which is essentially supported," said Rüdiger Göbel, deputy editor-in-chief of Junge Welt, a left-wing daily based in Berlin. "The anti-Germans are actually closer to the neo-conservatives in the United States."

To many observers, the anti-Germans are a conundrum. Most consider themselves communists, but according to a study carried out by Patrick Hagen at the University of Cologne, they "have abandoned almost all of the essentials of the communist movement and the left, such as the positive relations to the working class, anti-imperialism and anti-racism which has led to a deep split within the extra-parliamentary left."

The anti-German movement can be traced back to the fall of the Berlin Wall, where some on the far left demonstrated against reunification, warning that a stronger Germany could result in a new militarism and even a "Fourth Reich." They based their slogan on the phrase often used in Holocaust remembrance ceremonies: "Never Again." The anti-Germans went further, rallying around "Germany, Never Again." 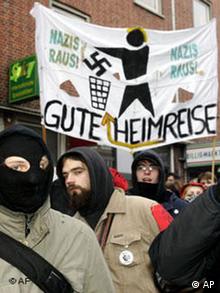 Far-left demonstrators at a anti-Nazi rally

As time went on, the group began to show more support for the United States. In 1995, on the 50th anniversary of the destruction of Dresden by the allies, the anti-Germans praised the bombing of the civil population, since in their view, so many of them had supported the Nazi regime.

But the movement really got behind the Stars and Stripes after the terrorist attacks of Sept. 11, 2001, which they saw as anti-Semitic and targeted at Israel. To them, it marked the rise of a new type of fascism. This time is wasn't from the far right, but from radical Islam and it had to be fought. The US, in their eyes, was the only one willing to fight it.

"Islamic terrorists and states such as Syria and Iran want to liquidate Israel," said Hermann Gremliza, publisher of the leftist magazine Konkret and one of the leading figures in the anti-German movement, in an e-mail response. "So (anti-Germans) act according to the motto: the enemy of my enemy is my friend."

Just after the war in Iraq broke out in 2003, the anti-German magazine Bahamas wrote an editorial entitled "Bush -- the Man of Peace!"

Whose side are they on?

These kinds of positions have put the group in sometimes violent opposition to the traditional far left. When anti-Germans show up at left-wing demonstrations with signs supporting American policy or Israel, they are generally not welcomed warmly.

"Whoever carries an Israeli flag is insulted and spit upon," Gremliza said. "But what do you expect, we're in Germany."

The traditional far left accuses the anti-Germans of getting in bed with the bourgeoisie. Some writers in the anti-German camp even write occasionally for the online site of the newsmagazine Der Spiegel or even such bastions of conservatism as the daily Die Welt.

Observers say that means they have an influence beyond their actual numbers, which are estimated between 500 and 3,000. Gremliza, however, said around 50,000 people read his magazine Konkret.

Anti-German goals, he says, are to uncover what group members see as the hypocrisy of a German foreign policy that has been harmful to Israel and helped the rise of a new "Islamic" fascism, which they see as a direct descendent of the form practiced by the Nazis.

"Germany wants an alliance with the Islamic world -- against the US," he said, despite Angela Merkel's close ties to her American counterpart. "And no one notices, except the occasional commentator in The New York Times and the anti-Germans."

In the wake of a racially motivated murder attempt in the city of Potsdam, experts are concerned about the increasing aggressiveness of the far-right scene despite reassuring statistics on the actual number of crimes. (April 19, 2006)

With the country turning away from the Red-Green government and poised for a new political departure, DW-World spoke to Green party politician Hans-Christian Ströbele about the legacy of the late '60s. (Oct. 14, 2005)

During Tuesday's opening session of parliament, the Left Party's candidate for deputy speaker was dealt a blow when he failed to get the votes needed from fellow parliamentarians. It has highlighted old schisms. (Oct. 19, 2005)