The internet has changed the music industry — and Africa is no exception. Artists are increasingly relying on concerts to combat music piracy, and more and more people recognize that artists must be paid for their work. 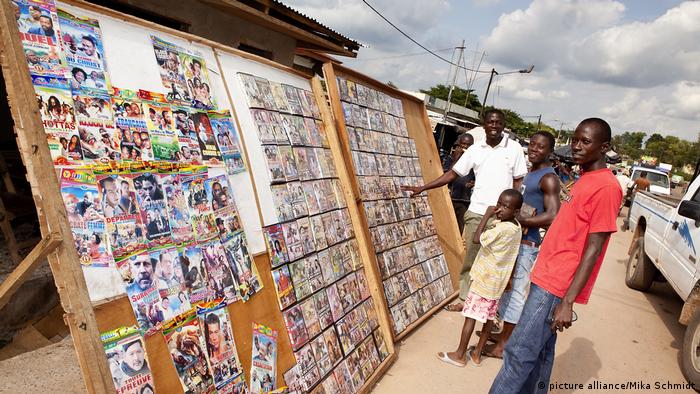 Anyone who wants to purchase music in an African city like Accra or Lagos can just head to the market. Often, young men with laptops can be found sitting between greengrocers and vendors selling household products. For a fee, those young men will download music onto USB sticks or a customer's cellphone. There are also a lot of stands selling CDs. Yet these do not tend to originate from the artists or even their music labels, instead the tracks have simply been downloaded from an online site. The only people profiting from the sales are the traders. The composers, songwriters and singers are left empty-handed.

"That is a big problem for artists," Cameroonian saxophonist Manu Dibango told DW. And it is not just musicians that are losing out, filmmakers are, too. Anything that can be digitalized can be easily stolen with the help of a computer. And now, even those selling pirated copies at markets are becoming superfluous: More and more lovers of African music simply download works onto their smartphones from home. "At some point, someone will have to pay," says Dibango. "Who is paying the price? Right now it's the artists."

Producing or distributing copies of someone else's intellectual property without permission is an infringement of copyright law. Theoretically, that also applies to Africa, as ethnomusicologist Veit Erlmann told DW. Erlmann has spent the last five years writing a book on copyright law in the South African music industry. Almost every country in Africa is a signatory of the international treaty for the protection of copyright, the Berne Convention for the Protection of Literary and Artistic Works, which went into effect in 1886 — when most African countries were under colonial rule. Today the protection of copyright is dealt with in a variety of ways across the continent.

National administrative organizations continue to be the mainstay of copyright protection. In Germany, for instance, the Society for Musical Performing and Mechanical Reproduction Rights (GEMA) fills that role. In the USA, a number of groups compete for the right to market and distribute works. In South Africa, the Southern African Music Rights Organization (SAMRO) is responsible. Musicians register their works with such groups, who are then tasked with enforcing copyright law. The groups collect royalties from radio stations, concert organizers and dealers and pay these out to artists. If a song is played or bought more often, the royalty payments increase accordingly.

Erlmann says the system "works pretty well" in South Africa. That is not the case in other countries though. A number of conditions have to be met for the system to function — and that is where the problems lie. Not all African artists register with their countries' administrative agencies, for instance. And radio stations or concert organizers often fail to document just how often a song is played. Thus, if administrative groups cannot collect complete information about a work, artists also cannot be payed royalties for it. Moreover, many artists complain about a lack of transparency at the agencies themselves.

According to the International Confederation of Authors and Composers (CISAC) some €9.2 billion ($11 billion) in licensing fees was collected globally in 2016 — €8 billion of that came from music alone. In Africa, some €67 million was collected, with almost half of that coming from South Africa. According to CISAC's current annual report, "insufficient legal frameworks for copyright protection, resistance from users and the limited efficacy of administrative societies" has hampered growth in the African market.

But ethnomusicologist Erlmann says much progress has been made in a number of countries: Kenya, Nigeria and Senegal, for instance, have seen positive developments on the legal framework front, as well as with agencies responsible for remuneration.

Ivorian singer Dobet Gnahore tells DW that copyright protection has also gotten better in Ivory Coast: "There are still loopholes but the music scene is more well-organized than it was in the past. So there has been progress and there has been an increase in the realization that artists have rights too." At the same time, it has become more difficult to track just what is happening to music online.

Artists also have more difficulties in that regard if they are dealing with state-run institutions in countries where the rule of law is weak. Malian Singer Habib Koite tells DW that even successful artists in his country have difficulty making a profit with their music: "We have a copyright office but it doesn't work. And our government has more important things to deal with than musicians." Erlmann cites another negative example: the Democratic Republic of Congo (DRC). He says the country has a very attractive music scene and many of its stars enjoy success abroad. Yet, for decades, it has been impossible for the majority of Congo's musicians to make a living from their work.

But sinking profits in the music industry are not limited to Africa: In 2007, American pop singer Madonna made headlines when she left her label and her concert organizer. But, Erlmann says, not being able to make a living from their music is a particularly big problem for African artists. That has motivated many of them to try a new business model — one that puts more emphasis on concerts, advertising and other sources. "In Ivory Coast you just can't live from your music if you haven't made enough songs that lots of people listen to," says Dobet Gnahore. The more popular one is, the more people come to your concerts.

Although digitalization has taken piracy to previously unthinkable levels it has also brought about new opportunities. Dobet Gnahore says that some artists put their music online free of charge in order to gain new fans. The music industry is pinning its hopes on streaming services that allow people to listen to music for a fee or are financed by advertising.

The latest CISAC report highlights the fact that royalties from digital music rose by 51 percent in 2016. Veit Erlmann says that although companies such as Apple and Simfy voluntarily pay royalties to artists in South Africa — the most developed music market on the continent — the legal framework to regulate digital sales has yet to be put in place. That, he says, is why copyright laws there must be updated: The existing statutes went into effect in 1978.

Aude Gensbittel contributed to this article.

International Africa Festival: Artists to look out for

Once a year the great and the good from the African music scene descend on the Bavarian city of Würzburg to celebrate the diverse sounds of the African continent. Here's what this year's lineup has to offer. (01.06.2018)

Uganda's courtly music with the amadinda

Amadinda music is one of Uganda's most important musical styles. Avant garde composers like John Cage made it popular in Europe simply by using the "amadinda," a xylophone used in East Africa. (16.12.2011)

Germany's top criminal and civil court has ruled that Internet providers can be ordered to block certain websites. But it stressed that copyright holders must first try other means to stop illegal content distibution. (26.11.2015)