Femen, the Ukrainian feminist activists whose topless protests have drawn global attention, are staking out new ground. They have taken their fight to Paris, soon to be the home of their international headquarters. 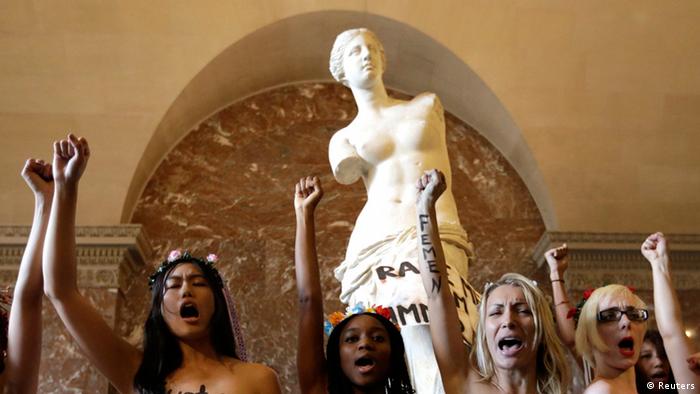 Sunlight slants into a first-story loft where half a dozen young women are painting signs for future battles. Signs like "Model do not go to brothel," and "Muslim women: Let's get naked!"

Call it downtime for these feminist activists, members of the Ukrainian-born group Femen, whose topless protests capture headlines and rile the establishment. Today, they are preparing their newest battleground - in Paris, where Femen opens its first international headquarters later this month.

"France is really the center of feminism," says blond-haired Inna Shevchenko, 22, explaining the choice. "Here is the camp where the revolution will start. Where soldiers will be born. But we will act all over the world."

Shevchenko is charged with launching the center, located in a working class neighborhood of northern Paris. New recruits will learn the basics - including physical workouts - for staging Femen's in-your-face campaigns. 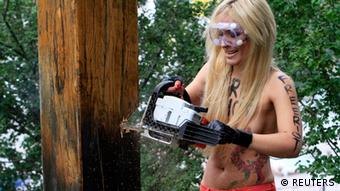 Shevchenko knows how to cut crosses. That's why she fled Ukraine last August, after demonstrating in support of jailed feminist punk band Pussy Riot. It seems an unlikely activity for the daughter of an army officer.

"I don't have a special story, like something happened to me and suddenly I became a feminist," Shevchenko says, pausing from painting a black punching bag to explain her mission.

"And honestly, I don't think you have to be raped before to become a feminist," she says. "I'm from the country where nobody speaks about women's problems … Ukrainian women, their mission - our parents, our grandmothers, they teach us to look good because you need to find a husband, because this is the only way for you to live normally."

Shevchenko joined the feminist movement as a university student in Kiev. The protests started off modestly - big crowds of women wearing pink. Then they became more daring, staging their first topless event in 2009.

"We looked at what other feminists do and we tried to do the same with big posters, big banners in the streets, screaming as much as we could," she recalls. "But nobody reacted. And once we took off our T-shirts, we saw the information the next day about Ukrainian women protesting in all languages of the world."

Shevchenko was fired from her job as a Kiev city hall press officer. She became a full-time feminist. 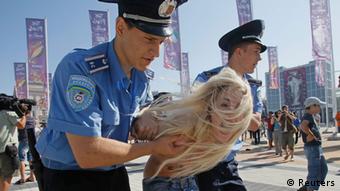 In France, they've stripped their T-shirts to protest Islamic Sharia law and the treatment of Muslim women. Last year, dressed in skimpy maids' outfits, Shevchenko and other Femen members shouted "shame on you!" in front of the Paris apartment of Dominique Strauss-Kahn.

"It was our reaction to an idiot who thinks because he has money and power, he can do whatever he wants with women," she says of the disgraced, former International Monetary Fund chief, who has denied sexual harassment charges.

Not all of the protests have turned out well. Last December, Shevchenko claims the KGB briefly abducted her and several other Femen activists following an anti-Lukashenko protest in Minsk.

"They cut my hair with a knife, they put oil on us. They did crazy things to make us scared," she says. The men finally freed the group in a remote forest.

The edgy Paris neighborhood where Femen is now based is no stranger to the exotic. Called Goutte d'Or, it's home to first-generation Africans and Arabs, drug dealers and working-class French. 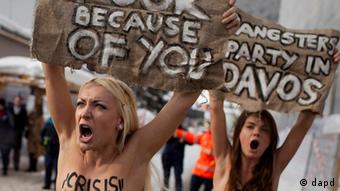 Femen protested at the World Economic Forum in Davos, saying the event was for 'gangsters'

"When these women demonstrated bare-breasted, the reception here was good - fantastic, even," Breuil says. "You have African women in boubous who say 'bravo, keep going, you're right!'"

Femen also plans to open training camps in Brazil and Ukraine. But Shevchenko says it makes sense to open the first one in Paris.

"France was always a feministic country," she says. "You have a lot of results. But now, it's time for a new color for it, because it's stuck in the conference halls and books. Sometimes that's really boring for the new generation."

Now is the time for feminists to be provocative, Shevchenko believes. To irritate what she still considers is a male-dominated world. At Goutte d'Or, at least, the war has begun.