Germany's foreign minister has urged Greece to continue tough economic reforms and to avoid debates that undermine its credibility abroad. His visit comes amid high anti-German sentiment over its role in austerity cuts. 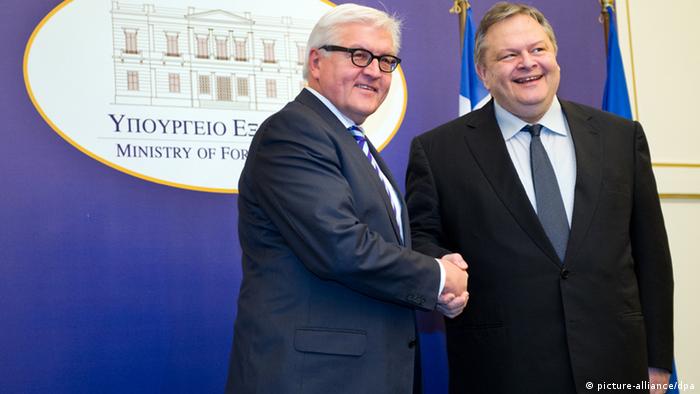 German Foreign Minister Frank-Walter Steinmeier (pictured left) reaffirmed his country's support for Greece and expressed his support for the steps it has taken toward economic stability.

However, recent political debates within the Greek government over seeking additional funds from the troika of lenders - the EU, the International Monetary Fund (IMF) and European Central Bank (ECB) - could hurt Greece's reform efforts, Steinmeier said.

"[I recommend you] use the remainder of the legislative period to take care of the work remaining and to count on the economic successes of this work to appear [as a result]," Steinmeier said.

The comments came during a two-day visit to Athens. He was scheduled to visit with Prime Minister Antonis Samaras on Friday.

'Largest obstacle behind us'

"We have the largest obstacle behind us," Venizelos said.

However, Greece's statistics office Elstat reported on Thursday that unemployment had reached 27.8 percent in October. Greek politicians have also debated the survival of the current government after EU elections in May.

Greek Foreign Minister Venizelos contended Athens would maintain its path and would succeed, adding that it would be one step closer to stability once its statistics office - Elstat - confirmed it had its first ever primary surplus in 2013.

"Our goal is to overcome this crisis. When we reach [this goal], Germany won't have to pay [anything] and German taxpayers won't be burdened," Venizelos said.

Germany's leading role in economic policies in the eurozone during the economic crisis has earned it a negative reputation in Greece, where critics view Berlin and Chancellor Angela Merkel as the driving force behind the country's economic woes. In late December, unidentified assailants fired shots at the German ambassador's residence in Athens. No one was injured in the incident. The Greek government later condemned the attack.

Chancellor Angela Merkel will continue dealing with the eurozone crisis herself, but her ministers will still have plenty on their plates in 2014. Challenges from online spying to energy policy face the grand coalition. (29.12.2013)