Steinbrück admits to over a million euros in lecture fees

Peer Steinbrück, the Social Democrat challenger to Angela Merkel in next year's election, has earned 1,25 million euros for speeches to big companies. He has been under pressure to reveal how much he makes on the side. 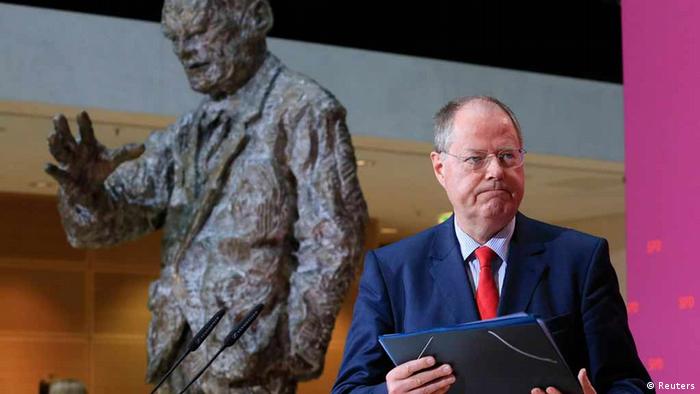 The high amount of money Peer Steinbrück has earned since 2009 has come as a bit of a surprise and is a hot topic of debate in the German media this Tuesday.

Since the former finance minister was named last month as the Social Democrat's challenger to Chancellor Angela Merkel, members of her conservative party have been attacking him over his numerous commitments outside parliament, calling for him to disclose all his earnings.

Steinbrück's critics are suggesting that his activities outside parliament may have moved him too close to business and banking interest groups, which his party, the SPD, wants to regulate more rigorously should they come to power next year.

The 1.25 million euros ($1.6 million) he revealed on Tuesday, came from speaking at a total of 89 banking and business meetings since 2009, and are in addition to his salary as a member of parliament, which is over 7,500 euros a month.

There has also been criticism from individuals in Steinbrück's Social Democrat Party, which has a large membership base among the low-income earners.

“Of course such a high figure will trigger skepticism in our party,“ Ralf Stegner, a member of the SPD board, told the Die Welt newspaper on Tuesday.

The mass circulation Bild newspaper published detailed figures on Tuesday, revealing that the largest single speaking fee to a business audience was 25,000 euros.

The data also showed Steinbrück gave 237 other addresses for free to schools and charities, and got industry lobby groups to donate to charity instead of paying him.

Steinbrück is the top earner in the German parliament, the Bundestag, other top earners are from Merkel's conservative party. They have so far blocked all moves for more transparency concerning polticians' earnings.

Under current legislation, parliamentarians have to disclose their income but need not give details as to the exact amount.

Steinbrück hopes to oust Merkel from power next September and head a coalition government with the Green Party.

According to recent opinion polls chances for his success are slim.