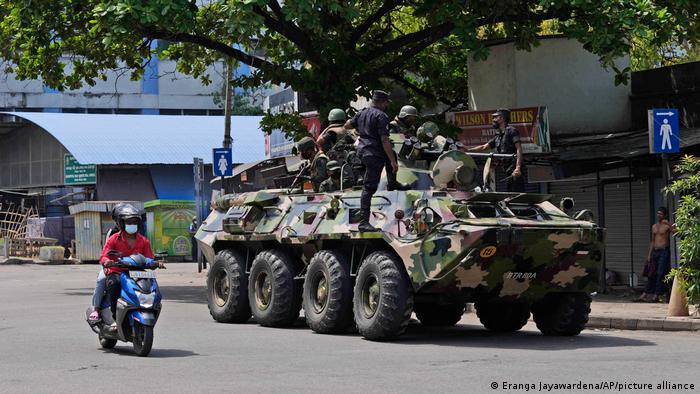 Sri Lankan authorities deployed armored vehicles and troops on the streets of capital Colombo on Wednesday, after pro-government mobs attacked anti-government protesters, triggering a wave of violence across the country.

Eight people have died since Monday, as the country sees mass protests spurred by a dire economic crisis. The curfew, which was supposed to be lifted on Wednesday, has been extended at least until Thursday morning.

More than 200 have been injured, the defense ministry said. In addition, 104 buildings and 60 vehicles were burned.

Security forces have been ordered to go on the offensive and use live ammunition to stop rioting, a top official told AFP news agency on condition of anonymity. Thousands of security forces were given orders to "shoot on sight."

In a televised speech on Wednesday, Sri Lankan President Gotabaya Rajapaksa said he would appoint a new prime minister, abolish the powerful executive presidential system and give more powers to the parliament.

Rajapaksa said he would give away much of his power to parliament and take steps to abolish the presidential system of governance entirely after some normalcy returns to the country.

"I am taking steps to appoint within this week a new prime minister who has the trust of a majority in Parliament, who can win over the confidence of the people and a new Cabinet to control the current situation," Rajapaksa said.

He said the measures would stop the country from "falling into anarchy and to continue the government's functions that are at a standstill."

Gotabaya Rajapaksa had earlier called upon the people to "reject the subversive attempts to push you towards racial & religious disharmony," in a tweet on Wednesday morning.

It was unclear what prompted the President to issue the warning.

"Without political stability, it doesn’t matter who runs the central bank," Weerasinghe said, "There will be no way to stop the economic deterioration."

Journalist Marlon Ariyasinghe told DW that the imposition of a curfew has contributed to the "relenting of violence," although there were still reports of isolated incidents of violence in of Negombo and parts of Colombo, both located on the island's western coast.

Asanga Abeyagoonasekera, senior fellow at the Millennium Project global think tank, told DW that Sri Lanka was in an "anarchic situation" and "completely out of control."

Abeyagoonasekera said that the protesters' demands remained unchanged and that "they want Rajapaksas out, including the president." He added that protesters were "hungry" and that some of those he had interviewed were subsisting on only one meal a day.

Abeyagoonasekera called for the establishment of an interim government and warned of the possibility of a "militarization" of Sri Lanka.

What has caused the violence

People blame the Rajapaksa dynasty for Sri Lanka's economic crisis, as the country has only about $50 million in reserves. This has led to massive shortages of fuel, cooking gas, and other essentials.

Sri Lanka has sought urgent loans from the International Monetary Fund (IMF) after receiving financial and other support from India and China. The IMF said on Tuesday it was concerned about the violence, and that virtual technical talks with Sri Lankan officials that started on Monday would continue "so as to be fully prepared for policy discussions once a new government has been formed."

There have been demonstrations in favor of the ruling dynasty as well, leading to both sides clashing with each other.

The president's brother, Mahinda Rajapaksa, resigned as Prime Minister on Monday. He had to be escorted out of the official residence on Tuesday, as violent protesters tried to enter the premises.

Sri Lankan Defense Secretary Kamal Gunaratne said that Mahinda Rajapaksa was whisked away to a military base in the country's northeast.

"He will remain there for the next couple of days and when the situation is normalised, he can be moved to a location of his choice," Gunaratne said.

There have been calls for Gotabaya to step down as well.

A 26-year civil war in the island nation ended in 2009 after security forces overcame militants from the minority Tamil community. Sinhalese Buddhists are the majority in the country of 22 million which also has Muslim, Hindu and Christian minorities.

How Sri Lanka got into its worst economic crisis in decades

Black flags have been raised across the country as millions of workers go out on strike in Sri Lanka. President Gotabaya Rajapaksa responded by giving the military greater powers.