Colombo has seen clashes between government supporters and protesters outside the offices of the president and prime minister. Hours later, Prime Minister Mahinda Rajapaksa offered to step down. 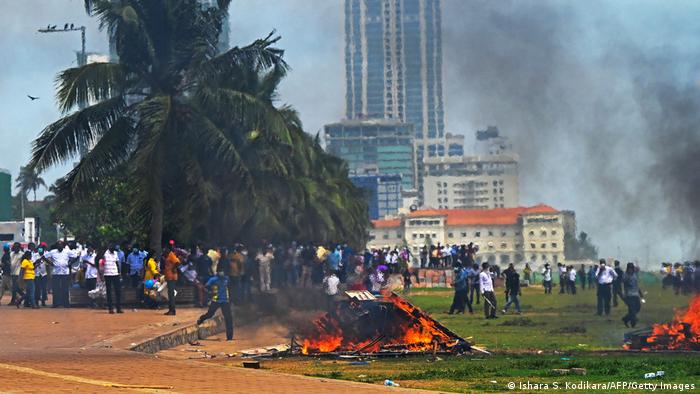 Sri Lanka's prime minister, Mahinda Rajapaksa, on Monday offered his resignation amid the island nation's worst economic crisis in decades that has led to widespread protests.

The 76-year-old's letter of resignation paves the way for a "new unity government."

"Multiple stakeholders have indicated the best solution to the present crisis is the formation of an interim all-party government," the letter said.

"Therefore, I have tendered my resignation so the next steps can be taken in accordance with the Constitution."

How Sri Lanka got into its worst economic crisis in decades

Troops were deployed in the capital Colombo on Monday after opponents and supporters of the Rajapaksa government clashed outside the president's office.

Authorities imposed a nationwide curfew to quell the unrest after dozens of people were hospitalized in the biggest clashes witnessed in weeks of anti-government protests.

Police reported at least two people were killed, including a member of parliament from the ruling Sri Lanka People's Front party. More than 150 others have been hospitalized.

Amid these developments, PM Rajapaksa offered to step down, answering one of the two calls from anti-government protesters, the other being the resignation of his brother — President Gotabaya Rajapaksa.

The country's largest opposition party said before the clashes it would not join any government helmed by a member of the Rajapaksa clan.

The president called for calm and restraint, tweeting that "violence won't solve the current problems."

"Strongly condemn the violent acts taking place by those inciting & participating, irrespective of political allegiances," he said on Twitter.

On Friday, the president declared a state of emergency amid increasing anger over the government's handling of its worst financial crisis since Sri Lanka gained independence in 1948.

PM's resignation is no 'solution'

Shritharan Sivagnanam, an MP with the Tamil National Alliance which represents the Tamil minority, told DW that Rajapaksa's resignation "cannot be seen as a solution."

"The president should resign, and all the ministers should resign," he said. "Political stability can only be the long-term solution for this crisis. A new government which takes care of people's needs should be formed. People should start believing in the government again."

R. Sivarajah, the chief editor of the Thamilan news outlet agreed that the resignation was unlikely to change anything.

"It is too late now," he told DW. "The move did not satisfy the common public. In fact, people are more agitated, and the protests are getting intense. People do not have basic amenities such as electricity or water."

He said Sri Lanka should appeal to a country like neighboring India to provide humanitarian help in the short term.

US ambassador condemns treatment of protesters

The US envoy to Sri Lanka condemned Monday's violence against anti-government protesters.

"We condemn the violence against peaceful protesters today, and call on the government to conduct a full investigation, including the arrest & prosecution of anyone who incited violence," ambassador Julie Chung tweeted. "Our sympathies are with those injured today and we urge calm and restraint across the island."

Free speech in Sri Lanka under threat amid political turmoil

Sri Lanka's cabinet ministers have resigned from their posts as an economic crisis deepens in the country. Sri Lankan President Gotabaya Rajapaksahas has yet to step down, despite growing demands for his resignation.