A riot at a Sri Lankan jail has left at least eight inmates dead and more than 50 injured. Prisoners had been protesting over surging coronavirus infections in the country's overcrowded facilities. 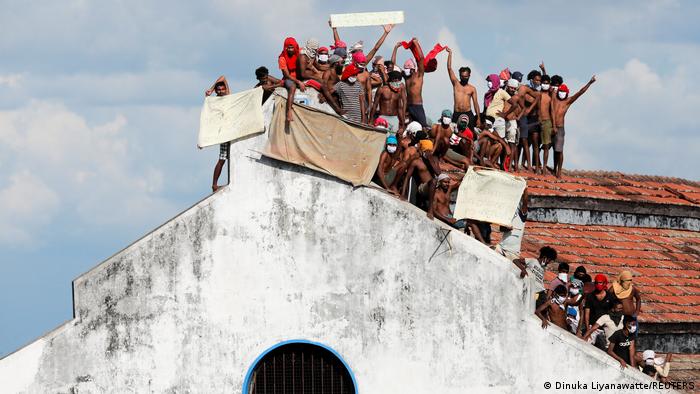 At least eight inmates were killed and dozens more injured in clashes with guards at a high-security prison on the outskirts of the Sri Lankan capital, officials said Monday.

The rioting erupted as prisoners at the Mahara jail complex, some 15 kilometers (9.3 miles) north of Colombo, broke out of their cells to protest over rising coronavirus infections at the facility.

Police said inmates set fire to the kitchens and briefly took two wardens hostage. Some 600 officers were deployed around the building's perimeter until the situation was brought under control, police spokesman Ajith Rohana said.

"We can't say it for certain but most of the deaths and injuries appear to be due to gunshots," he added.

Prisons Minister Sudharshani Fernandopulle told parliament that an investigation had been ordered into the unrest.

Rising coronavirus cases in prisons have sparked protests at jails across the country in recent weeks, with inmates demanding new isolation facilities and an increase in COVID-19 testing.

Sri Lanka has had almost 23,000 cases and 109 deaths since the start of the pandemic, according to data from Johns Hopkins University. The number of infections in the South Asian country's prisons exceeded 1,100 over the weekend. At least two inmates have died of the disease.

The Rajapaksa brothers could consolidate their hold on political power as Sri Lanka goes to the polls following months of delay due to coronavirus. The country has been without a parliament since March.