The Netherlands on Monday offered its "deepest apologies" for the role played by Dutch peacekeepers in the Srebrenica genocide.

For the first time since the 1995 massacre, Dutch Defense Minister Kajsa Ollongren apologized to survivors for the Dutch peacekeepers' failure to prevent the killings.

"The international community failed to offer adequate protection to the people of Srebrenica. The Dutch government shares responsibility for the situation in which that failure occurred. And for this, we offer our deepest apologies," Ollongren said during a ceremony in Potocari.

What happened in Srebrenica

The Srebrenica killings came at the tail end of the Balkan wars of the 1990s.

Their bodies were dumped in mass graves.

The peacekeepers, the Dutch government, and the United Nations have faced stinging criticism for their failure to prevent the killings.

The slaughter, judged an act of genocide by the International Criminal Tribunal for the Former Yugoslavia, was the worst single atrocity of the war, in which about 100,000 people died.

Dutch courts had already determined that the Netherlands was partly responsible for the fall of Srebrenica and compensation was paid to survivors.

Ollongren told survivors, "The events of 1995 led to deep human suffering that is palpable here to this day. We cannot relieve you of this suffering. But what we can do is to look history straight in the eye."

Last month, Dutch Prime Minister Mark Rutte apologized for the government's treatment of hundreds of Dutch soldiers who were sent to defend the enclave of Srebrenica during the 1992-95 Bosnian war.

Rutte admitted that the Dutchbat III unit had been given an "impossible task" of keeping the peace in eastern Bosnia without sufficient resources.

Thousands gathered to commemorate the 27th anniversary of the atrocity on Monday. 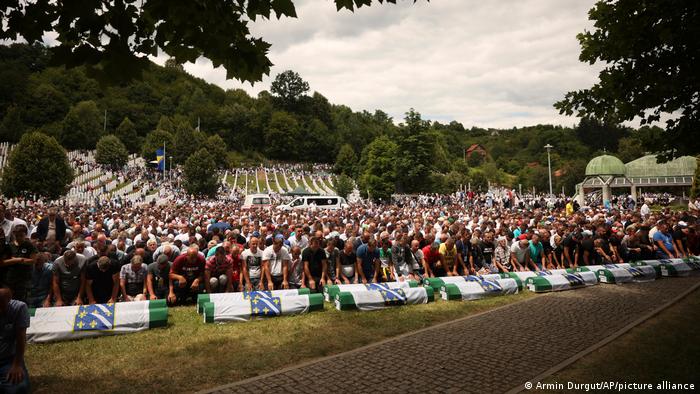 Mass funerals of those identified are held each July 11, the takeover date by the forces of Bosnian Serb general Ratko Mladic, who has been jailed for life for war crimes.

The discovery of skeletal remains from the massacre have become rare in recent years, even though some 1,200 people have still not been found, according to the Missing Persons Institute of Bosnia-Herzegovina.