The suspected driver in the Barcelona attack has been shot and killed by police in a vineyard. Meanwhile, crowds continued to lay flowers and candles on Las Ramblas where 13 pedestrians were killed and 120 injured. 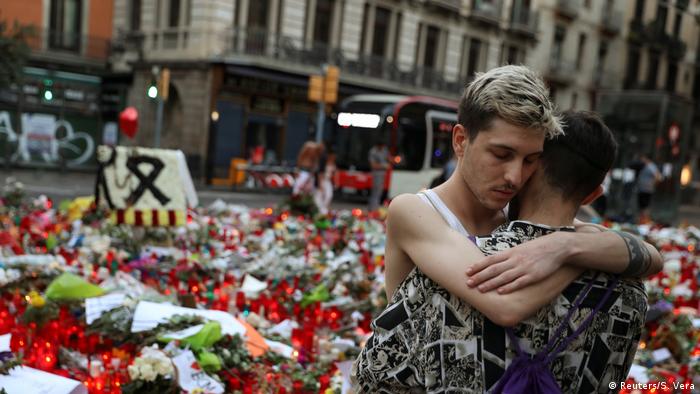 Catalan police said Monday afternoon that they had shot and killed Younes Abouyaaqoub in Subirats, some 50 kilometers outside Barcelona, ending a four-day manhunt for the lone fugitive suspect in the Barcelona terrorist attack. Four suspects are under arrest and eight others are dead.

Officials confirmed earlier in the day that they believed Abouyaaqoub, a 22-year-old Moroccan, was the man who drove a van into crowds of pedestrians on Barcelona's central Las Ramblas promenade last week, killing 13 people and injuring more than a hundred.

The Mossos d'Esquadra police force operation in Subirats was launched after a witness alerted authorities to the presence of a suspicious man in the vicinity, Catalonia's interior ministry said.

Abouyaaqoub was wearing a fake explosive belt and yelled out "Allahu Akbar" (God is Greatest) when he was confronted by police, Spain's El Pais newspaper cited anti-terrorism officials as saying. 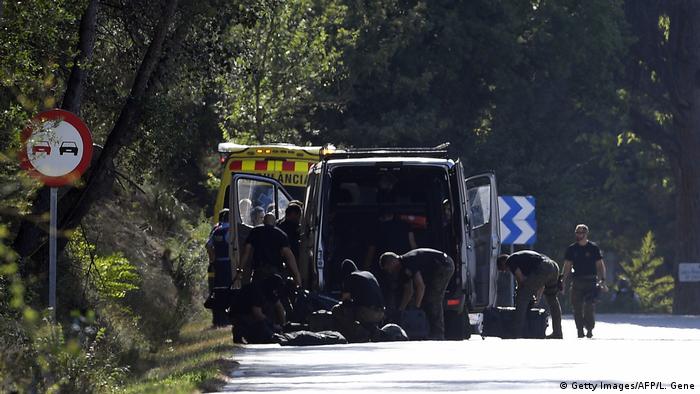 Police found the suspect hiding in a vineyard. He was shot after he appeared to show explosives and shouted "Allah is great."

A bomb squad and robot confirmed later that the explosive belt was fake. He was also found to have knives in his possession, police said. Abouyaaqoub's brother and friends made up the rest of the 12-man extremist cell.

Earlier, police announced that a 15th victim, 34-year-old Pau Perez was found stabbed to death in the car that was believed to have been stolen by Abouyaaqoub to make a getaway following the Barcelona van attack.

Authorities said Abouyaaqoub used the stolen Ford Focus to smash through a police checkpoint before abandoning it with Perez's dead body on the passenger seat in Sant Just Desvern, a town outside Barcelona.

Raids were carried out overnight to Monday in the small town of Ripoll, where police said an Islamist terror cell consisting of 12 men was based. Abouyaaqoub was believed to be the last remaining member of that cell still at large.

"I knew everyone implicated in the attacks. These were people who avoided problems, kept their distance when they saw a fight," Saber Oukabir, a cousin of two of the attackers, told AP.

Thursday's attack on Barcelona was followed hours later by a similar assault in the seaside town of Cambrils, during which police shot and killed five attackers after they rammed into pedestrians with a vehicle.  A number of the attackers were wearing fake explosive belts. One woman died from wounds sustained after one of the attackers stabbed her with a knife.

Imam among the dead

Catalonia's police chief confirmed Monday that an imam, Abdelbaki Es Satty, who had preached in Ripoll until June and was accused of radicalizing the younger cell members was among those killed in the blast.

Police told reporters Sunday that they had found some 120 gas tanks and explosive ingredients at the house, which led them to believe the cell had been planning another attack using explosives.

The so-called "Islamic State" claimed its "soldiers" had carried out both terror attacks.

Las Ramblas, the heart of Barcelona, has been hit by a terrorist attack. The vibrant and lively promenade came to a standstill when a white van plowed into a crowd of pedestrians. (18.08.2017)

German Chancellor Angela Merkel has issued a message of defiance after Thursday's terrorist attacks in and around Barcelona, which killed 14 people and injured hundreds. Many international leaders offered condolences. (17.08.2017)

Inside Europe: Terror and bloodshed in Barcelona