Police suspect jihadis had planned to load three vans with gas to carry out far deadlier attacks than the ones that occurred this week. Authorities are still searching for a 22-year-old Moroccan suspect.

Spanish police have found more than 120 gas canisters at a house in Alcanar where the suspects in this week's twin terror attacks were believed to be building bombs for as many as three attacks.

"We're starting to see clearly that (the Alcanar house) was the place where they were preparing explosives for one or more attacks in in the city of Barcelona," said Josep Lluis Trapero, the regional police chief for Catalonia.

On Wednesday, a day before the attack in Barcelona, an explosion occurred at the house about 200 kilometers (125 miles) south of the city. Police suspect it was an accidental explosion that may have occurred during a bomb-making attempt.

The explosion probably forced the militants to alter their plans, which had been six months in the making. Rather than running down people with a van, officials suspect the jihadis were originally planning three massive car bombs. Three rental vans were registered to the suspects, and officials believe the men they were planning to fill each of them with explosives.

Earlier Sunday, a mass honoring the 14 victims of twin terror attacks took place at Barcelona's famed Sagrada Familia basilica. Among those dead is a 7-year-old Australian-British boy who was reported missing by relatives after his mother was badly injured in the attack. His British father had gone to look for him, but officials have now confirmed the boy's death.

Jihadis used vehicles to mow down pedestrians on Barcelona's Las Ramblas promenade on Thursday and in the nearby seaside resort of Cambrils early Friday.  Some120 people were also injured.

"These have been days of tears, many tears," said auxiliary bishop Sebastia Taltavull.

Outside the church, snipers were posted on rooftops surrounding other landmark buildings. On the street, heavily armed police stood guard as hundreds of people gathered under gray skies. 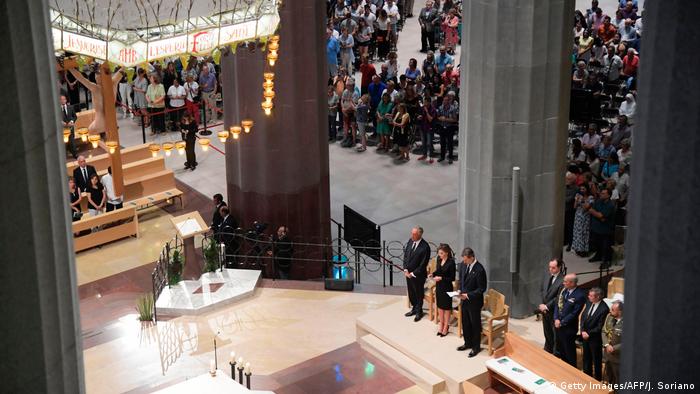 Catalonia resident Teresa Rodriguez said she came out to pray for the victims.

"What happened in Las Ramblas is really hard for us; we go for walks there often. It could have happened to me, my children or anyone. And here we are. It's huge, huge," she said as she fought back tears.

Later Sunday, nearly 100,000 people are expected at Barcelona's Camp Nou stadium for FC Barcelona's first game of the season, which will be marked by a minute of silence for the victims.

Interior Minister Juan Ignacio Zoido said Saturday the terror cell behind the attacks had been "dismantled," but local officials were more cautious.

Police are still searching for Younes Abouyaaquoub, 22, who police believe was the driver of the van that killed 13 in Barcelona. Spanish police said they can no longer be sure that Abouyaaquoub is still in the country. French police are also searching for the young Moroccan.

Hours after Thursday's attack in Barcelona there was a similar assault in the seaside town of Cambrils that left one woman dead. Police shot and killed the five attackers, some of whom were wearing fake explosive belts.

The "Islamic State" (IS) claimed responsibility for the attacks. If the claim is verified, it would be the terrorist group's first in Spain. A 2004 terror attack in Madrid that killed 192 was carried out by an al-Qaida cell.

Authorities are also trying to determine the role of an imam, Abddelbaki Es Satty, who is suspected of radicalizing the young men - some of them teenagers - who carried out this week's attacks.

Police now suspect a missing imam of having radicalized the youths who allegedly attacked pedestrians in Barcelona, Spanish media report. However, Islamic clerics in the assailants' hometown have condemned the attacks. (19.08.2017)