A criminal network that helped at least 1,200 Palestinians to claim asylum in Europe has been dismantled. Their victims were charged €8,000 for help to enter Spain via Bolivia in South America. 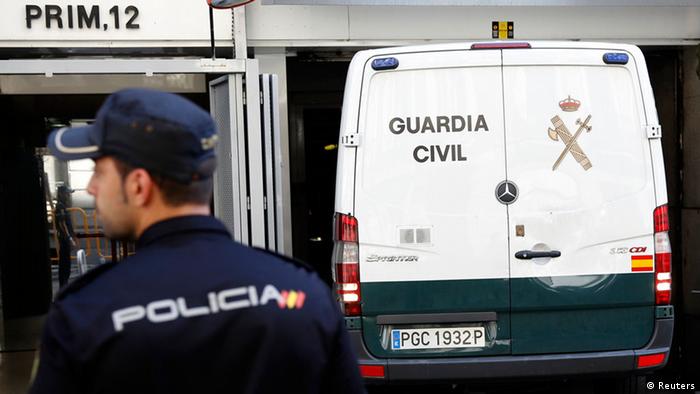 Spanish and French police announced on Sunday they had dismantled a people smuggling ring that helped more than a thousand Palestinians to fraudulently seek refuge in Europe.

According to a Spanish police statement, nine people — including the suspected ringleader — were arrested in the two countries, with the help of the European police agency Europol.

The network charged €8,000 euros ($9,200) to each Palestinian to help them to enter Spain via Madrid airport, where they then made "fraudulent asylum requests."

Police suspect the gang made €9 million from their smuggling operations, which helped around 1,200 Palestinians move from the Middle East.

"Instead of continuing with the administrative procedures related to their asylum request, they were transported by the group to Belgium and Germany in minivans," the statement said.

Suspicions were first raised when police observed that asylum requests by Palestinian citizens in Spain had increased significantly since January.

Investigators discovered that most of the applicants had not furthered their asylum application in Spain.

Police said the scam began in Lebanon where the group canvassed Palestinian refugees and then provided them with travel documents.

The Palestinians were put on planes from Beirut to Ethiopia, then onto Brazil and Bolivia. On their return leg to Lebanon, the travelers would make a transit stop in Spain, where they claimed asylum.

The Spanish news agency EFE said six of the detainees have already been transferred to jail, and that police expected to make further arrests.

EFE said the organization was based in the northern French city of Amiens, and that its members had a good knowledge of Spanish law relating to asylum requests.

Palestinians to get 10 tons of mail — eight years late

Cogat, Israel's defense agency responsible for Palestinian civilian affairs, has not explained why the mail was held up. Palestinian workers are now sorting through the mountains of mail, preparing it for delivery. (19.08.2018)

Residents of the Bedouin village of Khan al-Ahmar are constantly living in fear that their village could be razed to the ground by Israeli authorities. Tania Krämer reports on how they're coping with the uncertainty. (03.10.2018)