Spaniards demonstrated in more than 50 cities on Sunday to protest against the government's latest plans to trim education and health spending as part of its bid to tackle the country's debt crisis. 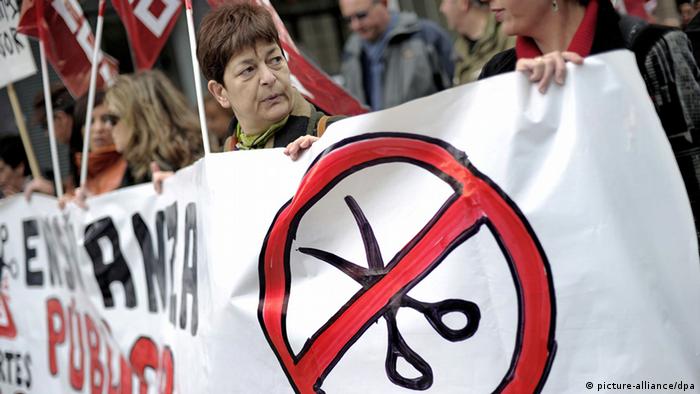 Spain's two biggest unions, the CCCO and the UGT, called for further demonstrations on Tuesday, May 1, Labor Day.

The unions said Spaniards had marched in 55 cities on Sunday and put the turnout at the largest rally in Madrid at 40,000. The overall turnout was smaller than March 29, when hundreds of thousands took to the streets.

UGT secretary general Candido Mendez vowed a sustained campaign: "We are not going to forget the cuts; we will be there every day until they have been remedied," Mendez said. 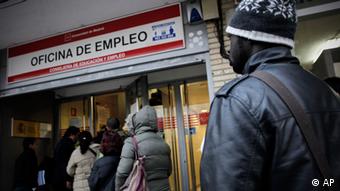 Half of Spain's young are jobless

Data released by Spain's statistics bureau on Friday put overall unemployment at 24.4 percent, with half of those aged under 25 out of work. Spain's jobless now total 5.4 million. The bleak news followed a downgrade of Spain's debt rating to BBB+ by the ratings agency Standard & Poors.

Addressing a meeting of his conservative People's Party in Madrid on Sunday, Prime Minister Rajoy said the latest education and health cuts agreed with Spain's 17 regional administrations were essential to slash this year's budget deficit to 5.3 percent - down from 8.5 percent last year. 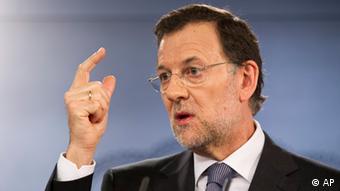 Rajoy says the cuts are unavoidable

"We are implementing a series of reforms that are more positive, necessary and required than ever," Rajoy said referring to firmer European Union limits agreed in December. "Spain needs deep structural change, not makeup."

On April 20, his government, which took office five months ago, decided that pensioners would have to pay a portion toward their previously free pharmaceuticals and also set higher fees for students to raise an extra 10 billion euros ($13 billion). Previously, it had announced cutbacks this year worth 27 billion euros ($36 billion). Before their election last November, the conservatives had promised not to touch the welfare state established in the 1970s.

At the unions' Madrid rally, protesters carried banners reading "People of Europe, Rise Up" and "It's a Crime to Cut Health Care."

Protesters in northeastern Barcelona, northern Bilbao, eastern Valencia and many other regional capitals carried banners urging Rajoy to not "mess around with health and education."

A journalism graduate at the Madrid march, Alba Sanchez, described the cuts as "atrocious."

"I can't find work and my parents are suffering because both of them are working in the public health sector. Whatever they have obtained in over 30 years of struggle, Rajoy destroyed in a month," Sanchez told the news agency AFP. 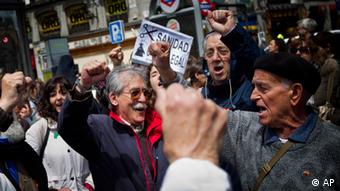 Some protesters sang songs of solidarity

Ruth Colomo, a 39-year-old teacher, told the Associated Press that the country's public education system and national health service had been built up over
decades with Spaniards' tax contributions.

"They are ours and I think we have the right to fight for them," she said.

The National Statistics Institute said on Friday that Spain now has 1.7 million households in which no one has work.

The Spanish economy - the four largest in the eurozone - is forecast to shrink by 1.7 percent this year. The country is already into its second recession since Spain's real estate crash began in 2008 during the global financial crisis.

Standard and Poor's has reduced Spain's debt rating for the second time since January. Madrid may see its debt burden grow as it slips back into economic recession and contemplates lending more help to banks. (27.04.2012)