Spain's Cabinet has given the green light to tighter rape laws based on the principle of consent. The move has long been called for by women's rights groups. 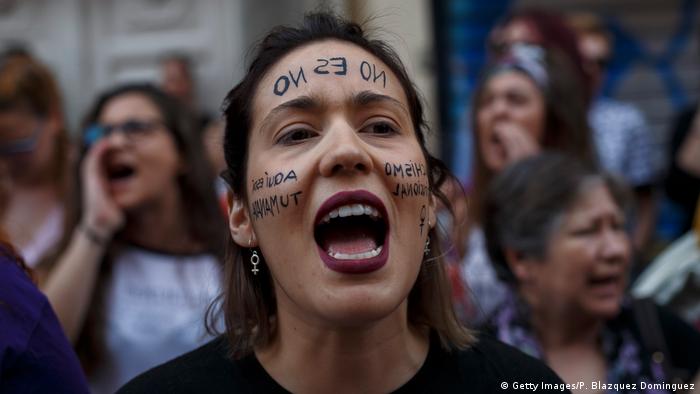 'No is no': Spain saw widespread protests in 2018 after a group of gang rapists initially escaped a conviction for sexual assault

Spain on Tuesday took a decisive step toward protecting women better in cases of sexual violence after the Cabinet approved a draft bill that requires explicit consent for sex acts.

This means Spain could soon join the dozen European states that have changed their legal definition of rape to be sex without consent, according to Amnesty International. They include Belgium, Croatia, Cyprus, Denmark, Germany, Greece, Iceland, Ireland, Luxembourg, Malta, Sweden and the UK.

The bill, dubbed the "only yes means yes" law, must be approved by parliament, with a vote expected in September.

The proposed law "makes clear that silence or passivity do not mean consent, or that not showing opposition can not be an excuse to act against the will of the other person," government spokeswoman Maria Jesus Montero told a news conference after the Cabinet meeting.

Up to now, Spain's criminal code has required proof that violence and intimidation were used for an assault to be classed as rape.

This was highlighted by the notorious gang rape of an 18-year-old woman in 2016 during a bull-running festival in the northern city of Pamplona. In that case, the five men responsible were initially convicted only of the lesser offense of sexual abuse because the court found no proof they had used physical violence to justify a conviction for sexual assault.

The verdict triggered widespread protests and was later overturned by Spain's Supreme Court, which imposed sentences for rape.

The bill approved on Tuesday also proposes prison sentences for work-related sexual harassment and makes catcalling a criminal offense for the first time. Forced marriage and genital mutilation will also be classed as criminal offenses.

After the meeting, Socialist Prime Minister Pedro Sanchez called on Twitter for Spain to be made "a freer and safer place for women" and "a society where we all live without fear and in equality."

In 2004, Spain approved Europe's first law that specifically cracked down on domestic violence and made the victim's gender an aggravating factor in cases of assault.