A residential building has been seriously damaged by an explosion in Madrid. At least two people died in the blast, apparently caused by a gas leak. 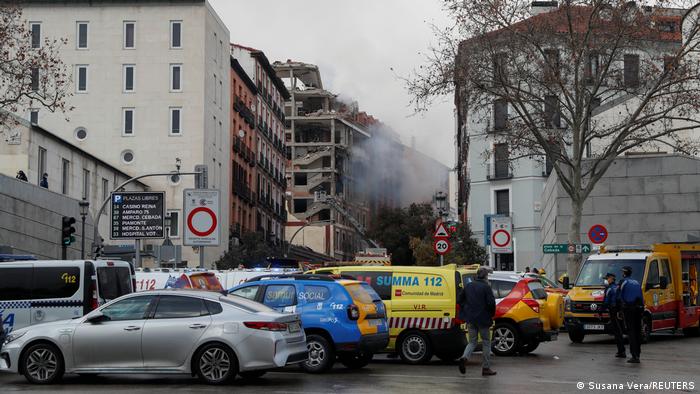 A large explosion killed at least three people and destroyed most of a building in the Spanish capital Madrid on Wednesday.

Posts on social media showed a multi-level residential building with serious damage and debris littered over the street.

Smoke could be seen rising from the scene from across the city.

A witness told local Madrid newspaper ABC that "everything shook like a bomb" and that "much of the facade has fallen."

Local resident Leire Reparaz, 24, told the Associated Press that she heard a loud explosion: "We didn't know where the sound came from. We all thought it was from the school. We went up the stairs to the top of our building and we could see the structure of the building and lots of grey smoke."

Firefighters, police and specialized emergency workers were at the scene and and the surrounding area was evacuated. However, firefighters were reportedly unable to enter the building due to an ongoing fire.

At least three people died and eleven were injured in the blast. The city mayor said the explosion appeared to have been caused by a gas leak.

The blast happened just before 3 p.m. local time (1400 GMT) in Calle de Toledo, a main thoroughfare just south of the city center. The building, reportedly owned by the archdiocese, is located near a school, a church and a nursing home. It reportedly housed priests in training.

Spain: PM Sanchez calls on office workers to ditch ties to save on energy 29.07.2022

Spainish Prime Minister Pedro Sanchez has called on office workers to ditch their neckties. In a press conference, with his collar open he said saving energy ought to trump sartorial style in searing temperatures.

As NATO sets its course in terms of defensive strategy in the face of Russia's war in Ukraine, Christoph Heusgen, Chairman of the Munich Security Conference, told DW that NATO's new strategic concept is the right course of action.