Spain: Elephants roam highway after one killed in truck crash

Emergency workers used a crane to lift an injured elephant from a nearby ditch as others roamed the highway. It was unclear why the circus truck overturned as it tried to overtake a car. 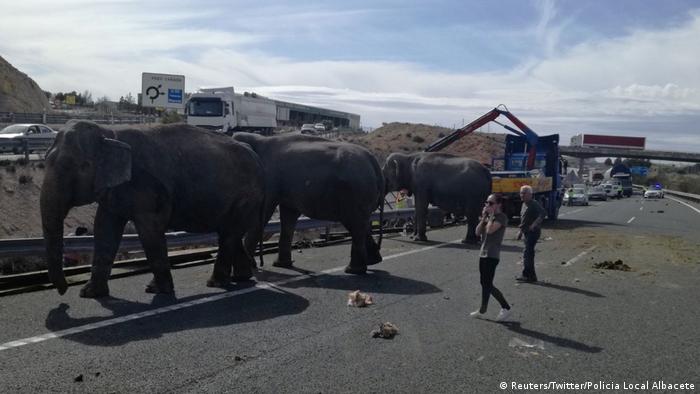 An elephant was killed and two others were injured after the truck carrying them crashed on a highway in southeastern Spain on Monday.

The circus truck, which was carrying five elephants, overturned as it was trying to overtake a slow-moving car in the central region of Castilla-La Mancha, according to the government department that oversees Spain's road network. Once it passed the vehicle and positioned itself on the right lane of the motorway, the truck tipped over.

Traffic was blocked for two hours as three elephants wandered the highway after the crash, while emergency workers used a crane to lift another of the giant mammals from a nearby ditch.

General Director of Traffic at the Interior Ministry Gregorio Serrano posted a video of the injured elephant being lifted to safety on Twitter.

The truck's driver was unharmed, local media reported, while the four surviving elephants were being treated at a nearby industrial site.

The Spanish animal rights political party PACMA denounced the incident and called for the end of animal uses in circuses. "Elephants should be in the jungle, not being transported to shows where they are mistreated," PACMA said over twitter. The group vowed to monitor the situation and stay informed on the status of the injured animals.

Read more: Sri Lanka tackles the elephant in the room

Monday's incident marks the second of its kind to occur in Spain in the past month. On March 20, neighbors in a small town of the south-western municipality of Extremadura encountered a hippopotamus wandering around. The large animal, which weighed approximately one ton, had escaped a nearby circus.

About 7,000 wild animals are treated each year at the GREFA wildlife hospital in Madrid. DW visited the patients, feathered and furred, to find out how humans put them at risk - and offer hope of conservation. (29.03.2018)

Living in an elephant's footsteps

Elephants are amazing animals - not only because of their trunk. Their feet are also unique. Numerous animals dwell in the water-filled footprints that elephants have left behind. (27.03.2017)

Elephants on the move

The truck ran off a dyke and slammed into a group of people in the Nieuw-Beijerland neighborhood near Rotterdam. The exact cause of the crash is not yet known.

In separate accidents some 250 kilometers apart in Turkey, commercial vehicles plowed into emergency teams who were attending to earlier crashes. Firefighters and paramedics were among the dead.

The baby elephant was traveling with its mother as part of a jungle herd that was passing by when it fell into a manhole. The mother elephant nearly died during the rescue.