After rejecting the Swiss request for Falciani's extradition in 2017, a Spanish court released him on bail. Two Catalan separatist leaders are in Geneva, seeking to avoid Spanish legal proceedings. 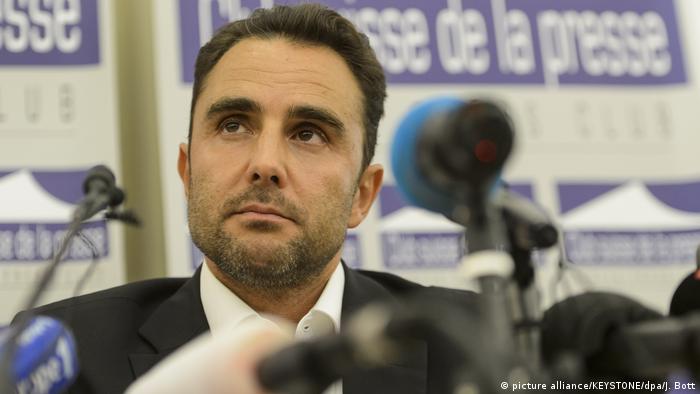 Falciani at a news conference in 2015

After police arrested Falciani in Madrid on Wednesday, a Spanish National Court Judge Diego de Egea released him on bail on Thursday, telling the French-Italian national he had to stay in his Spanish home while the Swiss extradition request was considered.

The 46-year-old's passsport was withheld and he needs authorization to leave the town where he lives. He also has to report to the court once a week.

Falciani came to fame in 2008 when, as a computer analyst working for the Swiss branch of global bank HSBC in Geneva, he leaked information on thousands of bank clients to tax authorities in France.

The information he supplied led to the prosecution of tax evaders in France and elsewhere in Europe. For Falciani it led, in absentia, to a five-year jail term from a Swiss court in November 2015 for financial espionage and data theft. Swiss authorities want him to serve the term in Switzerland.

Swiss authorities first issued an international arrest warrant for Falciani in 2009, when he was in France, but the French authorities did not comply, instead prosecuting tax evaders. In 2012 he went by boat from France to Barcelona where he was arrested and spent several months in a Spanish jail.

But he was not extradited to Switzerland then as the National Court decided the charges he faced — of violating bank secrecy — were not considered crimes under Spanish law if the secrecy was a cover for serious offenses. The court actually defended him, thanking Falciani for his collaboration which had "allowed information to be handed over to various authorities in various states including Spain."

It is unclear as to what new arguments could be used for the court to overturn its 2013 decision not to extradite.

An extra element in the equation has arisen in the form of two Catalan separatist leaders who are currently in Geneva.

The Spanish judiciary has issued an international arrest warrant for pro-independence leader Marta Rovira, secretary general of the Republican Catalan Left party. She left for Geneva a day before her court appearance, when a number of Catalan parliamentarians were held in custody pending rebellion charges and accusations of misuse of public funds. Swiss authorities have not ruled yet on her extradition.

No warrant has been issued for former Popular Unity Candidacy (CUP) Catalan parliamentarian Anna Gabriel. She went to Geneva in February rather than appear before the Spanish Supreme Court in relation to her part in the Catalan bid for independence last year. She is wanted by the Spanish authorities and would be arrested if she went back to Spain. She claims she would not get a fair trial there.

Switzerland renewed their arrest order for Falciani on March 19, four days before Rovira went to Switzerland, but several weeks after Gabriel had arrived there.

Arrest a 'sweetener' for Swiss?

Miguel Urban of Spanish anti-austerity party Podemos repeated some media speculation when he said he wondered if Falciani had been arrested as a "sweetener" to persuade Swiss authorities to comply with Spain's extradition requests.

The Spanish government has denied the two cases are linked. "There is no political decision, there is no government involvement in these issues," Justice Minister Rafael Catala told reporters in Madrid on Thursday.

Catala said Falciano's arrest was due to "an international request and an exercise of cooperation by security forces, as will later happen in the courts."

Defense lawyer Manuel Olle said Spain's National Court had denied Falciani's extradition in 2013. "He can't be tried twice," Olle said, adding that he considered the case to be politically motivated.