Spain battles for ownership of shipwreck treasure | Europe | News and current affairs from around the continent | DW | 29.07.2009

Spain and a deep-sea exploration company are battling over the cargo of an 18th century ship discovered off the Portuguese coast which consists of thousands of precious coins. 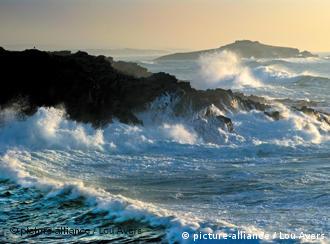 The seas off the Spanish coast are awash with shipwrecks

In 2007, the shipwreck of a two hundred-year-old Spanish treasure ship was re-discovered off the coast of Portugal by the American company, Odyssey Marine Exploration. The galleon "Mercedes" was returning from the Spanish colony of Peru in 1804 when it was sunk by the British navy.

Completely intact, its treasure of 600,000 gold and silver coins has an estimated worth of 350 million euros ($495 million).

After its discovery, Odyssey took the treasure back to the United States, causing the Spanish government to accuse the company of plundering Spain's heritage. It is now demanding the return of the treasure.

Jose Maria de Alvear is a descendant of Diego de Alvear, the second in command of the Spanish treasure ship. He is among more than a hundred descendants of the crew of the Mercedes who are supporting the Spanish government's legal bid to have the treasure returned to Spain.

"De Alvear was my great, great, great Grandfather who saw the tragedy of the Mercedes from the other boat because he was the second in command of the fleet," de Alvear explained while pointing out a portrait in Madrid's Naval Museum of a dashing looking Diego de Alvear wearing his red and dark navy blue uniform.

"He saw the Mercedes sink into the deep of the ocean with his wife and seven of his eight children dying in the tragedy," de Alvear said.

De Alvear firmly believes the coins should be returned to Spain. "We want to keep not just the treasure but also the memories of Spain and our memories."

Under the laws of sovereign immunity, any ship that belongs to a government remains the property of that government, whatever happens to it and wherever it is sunk.

According to Odyssey, however, there is convincing evidence of the commercial nature of the Mercedes' mission which, the company believes, legally nullifies Spain's claim to sovereign immunity.

This claim is completely rejected by Spain.

"The historic documents show the ship was manned by naval officers, was built for the Spanish navy, served in the Spanish navy, including a number of military engagements, (and) was despatched under the orders of the King and the head of the armed forces," Gould said.

Odyssey has countered this claim, however, with a second legal argument; the company believes because the majority of the ship's contents did not belong to the Spanish government, but rather to private individuals, the company should receive a generous salvage reward.

"We're talking about a claim not to a vessel but to cargo," said Odyssey's Vice President, Melinda McConnnell.

At a recent US court decision, a Florida judge recommended that the treasure be returned to Spain, but has left the final decision to a higher court – a decision which gave rise to celebration in Spain. However, the same judge also ruled that Peru could potentially have a legitimate claim to the shipwreck after the country staked a legal claim late last year.

"Spain ruled Peru based on slavery, on genocide, with miners who worked like slaves until they died to obtain Peruvian gold – it was an illegitimate government," said Admiral Fernando Casaretto from the naval museum in Peru's capital, Lima.

"So if Peru intervenes in the case it would be with just cause because this is a minuscule part, a tiny part, of the treasure that belonged to Peru, " said the Admiral. "It was taken during a three hundred year period, thanks to Peruvian blood, during this genocide that happened under Spanish rule."

The implications of this court case could have a big influence on the future of shipwrecks and their treasures. The Spanish government has compared Odyssey to modern day pirates, plundering the seas.

Marine archaeologists would like to see shipwrecks and other human history that lies beneath the sea given more protection. That can only come from national governments who are confident that the law is on their side. Spain has now formed a special government funded marine exploration team to find shipwrecks before private companies do.

But if Odyssey wins this case it would encourage other private companies to engage in marine exploration for profit. And there's a lot to re-discover. It is thought there's more gold from sunken Spanish galleons in seas off the Spanish coast than there is in Spain's central bank.

Hermann Parzinger takes on the position of President of the Foundation of Prussian Cultural Heritage on March 1st 2008. On February 24, 2008 DW-TV will present a portrait of the culture manager. (31.01.2008)

A Treasure Returns to Germany

For more than half a century, 111 stained glass windows from a church in Germany were locked up in a museum vault in Russia. Now Russia's parliament has voted to give them back. (10.04.2002)

Hidden Treasure in the Scrap Heap

German art historians say they may have found three long-lost drawings by Peter Paul Rubens, a Flemish artist of the 17th century. (01.02.2002)