The four SpaceX crew members arrived at the International Space Station after a journey of about 21 hours, to begin a six-month research trip. Flight commander Raja Chari said the ISS was "a pretty glorious sight." 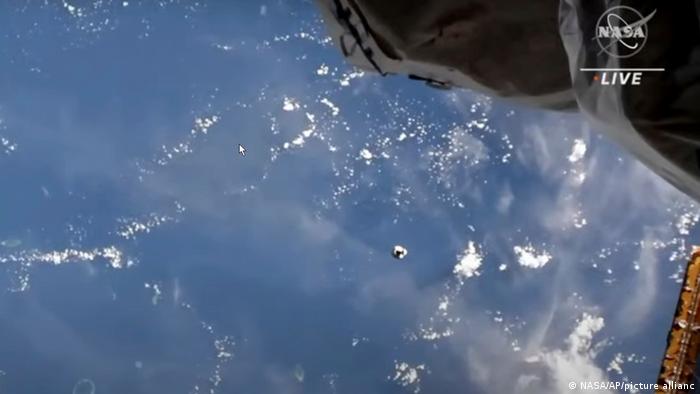 Four astronauts arrived at the International Space Station (ISS) in the SpaceX Dragon capsule on Friday after docking with the orbiting laboratory about 21 hours after taking off from Cape Canaveral.

The team will spend six months in space on a research mission.

They arrived at around 2330 GMT in the vehicle known as Endurance. The space station was flying about 260 miles (420 km) above the eastern Caribbean Sea, according to NASA.

Chari said it was "a pretty glorious sight" when they first spotted the ISS about 20 miles away. Maurer said it was "floating in space and shining like a diamond," and said they were all thrilled and very excited.

The crew was welcomed by the three current occupants — Russian cosmonauts Pyotr Dubrov and Oleg Novitskiy and NASA astronaut Mark Vande Hei, who came in a Soyuz flight to the space station earlier this year.

The previous team, Crew 2, had safely splashed down in the Gulf of Mexico on Monday after spending 199 days in orbit.

German astronaut aboard mission with SpaceX to the ISS

On arrival, the crew conducted standard leak checks and pressurized the space between the spacecraft in preparation for opening the hatch to the space station.

Highlights of their research include an experiment to grow plants in space without soil or other growth media, and another to build optical fibers in microgravity, which prior research has suggested will be superior in quality to those made on Earth.

The team will also conduct spacewalks to upgrade the space station's solar panels.

The liftoff was initially supposed to happen on October 31 but was delayed due to weather conditions and medical issues faced by a crew member.

Hubble has orbited Earth for three decades. When one of its computers failed, NASA had to call in former engineers still familiar with its technology.

The planned moon landing has been pushed back by at least a year over budgetary issues and legal disputes. Astronauts will return to the lunar surface no sooner than 2024.