The European Space Agency is paying millions to a start-up to incinerate a large piece of space junk. Thousands of defunct satellites are still circling the Earth, threatening spacecraft that are still in use. 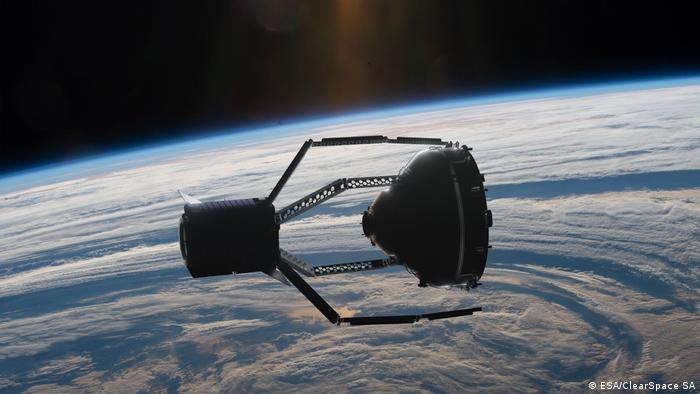 A Swiss company is set to launch our planet's first space cleanup mission after the European Space Agency (ESA) said on Thursday they were signing a €86 million ($102 million) deal with the representatives of the Swiss start-up.

The firm, ClearSpace, hopes to launch a special satellite by 2025 that would be able to snatch pieces of space debris in the Earth's orbit. Currently, thousands of defunct satellites and many more smaller pieces of trash are circling the planet, posing an ever growing collision risk to working satellites and even the International Space Station.

"Imagine how dangerous sailing the high seas would be if all the ships ever lost in history were still drifting on top of the water," ESA Director General Jan Wörner said while first announcing the mission last December.

Luc Piguet, founder and CEO of ClearSpace, also warned that the danger will only grow due to plans to send up "hundreds or even thousands of satellites" in the low Earth orbit in the coming years.

"The need is clear for a 'tow truck' to remove failed satellites from this highly trafficked region," he was quoted as saying on the ESA website.

How will the cleanup work?

The first-ever space cleanup mission, ClearSpace-1, would rendezvous with a discarded rocket fragment weighing some 112 kilograms (247 pounds). The discarded object, dubbed Vespa (Vega Secondary Payload Adapter) helped bring up a satellite in 2013. The ESA says its sturdy construction would make it a good starting point, with the follow-up missions aiming to capture more challenging objects and then several bits of debris at once.

After securing Vespa, the ClearSpace-1 spacecraft will drag it out of orbit so it would burn up in the atmosphere.

ESA said that paying ClearSpace rather than developing its own space debris remover, marks a "new way for ESA to do business." While the agency would provide "key expertise" and pay for the first mission, the Swiss company is expected to cover the rest of the cost through commercial investors.