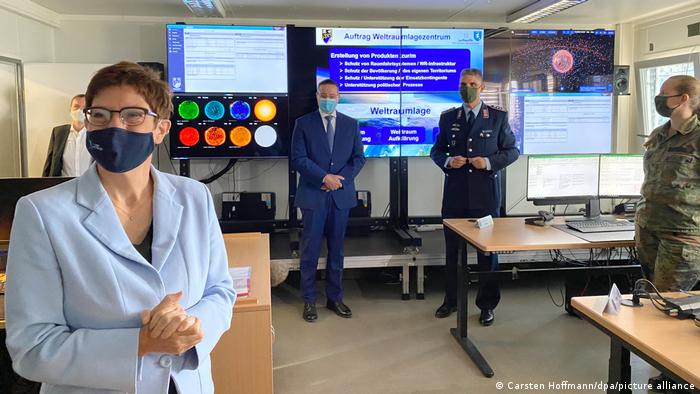 ASOC — part of the German Luftwaffe's (air force) facilities serving NATO  — will initially have 50 experts, growing to 150 by 2031.

Observing the airspace over Germany and orbital space beyond the Earth's atmosphere "belonged together," said Kramp-Karrenbauer.

"They can no longer be separated," she said, referring also to a nearby Luftwaffe center, where crews observe German airspace for potentially suspicious activity.

"We are well positioned for both tasks and for the future it will be better," said Kramp-Karrenbauer.

Instead of having a rotating dished antenna, GESTRA (German Experimental Space Surveillance and Tracking Radar) has a so-called "phased array" that still enables operators to pan across the sky and spot debris zooming past.

It was developed by Germany's Fraunhofer FHR radar institute for Germany's civilian DLR aerospace agency. It is based near Koblenz, around 200 kilometers (125 miles) from ASOC's base at Uedem, close to where the Rhine flows into the Netherlands.

"We don't try to remove the debris, instead we try to see it," said Eversberg.

FHR, also equipped with a 34-meter-diameter TIRA radar at its hilltop headquarters near Bonn, says the rotating antenna is able to track objects in "high precision," so that functioning satellites can avoid space junk.

What will happen with the data?

The Luftwaffe said the transportable GESTRA system represented a "new era for Germany and Europe in space observation."  It's scheduled to start contributing to ASOC data-gathering operations next month.

ASOC would compile all incoming radar data and calculate the trajectories of orbiting objects, said the Luftwaffe in a statement last December.

Information gleaned would then be provided to universities and research facilities in Germany, and the European tracking project EUSST.

The EU Space Surveillance and Tracking service was established in 2014, comprising initially, five members — France, Germany, Italy, Spain and Britain — and rose to eight in 2018 with the addition of Poland, Portugal and Romania.

Currently, 51 sensors feed into the system — radars such as GESTRA and TIRA as well as telescopes and satellite laser ranging stations (SLR) in Graz in Austria, Borowiec in Poland San Fernando in southern Spain.

As well as delivering supplies to the International Space Station (ISS), the vessel has a device that will remove space junk in orbit. The launch was made more urgent by the failure of a Russian supply rocket last week.