As well as delivering supplies to the International Space Station (ISS), the vessel has a device that will remove space junk in orbit. The launch was made more urgent by the failure of a Russian supply rocket last week. 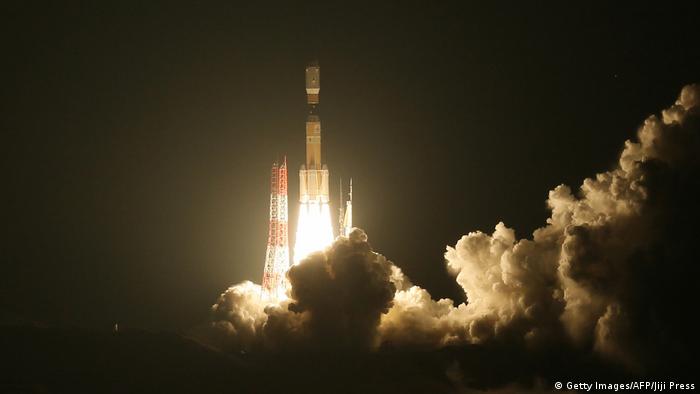 The vessel, dubbed "Kounotori," which is the Japanese word for white stork, was launched on Friday evening local time from the southern island of Tanegashima.

The cargo ship, attached to an H-IIB rocket, contains nearly five tons of food, water and other supplies.

Describing the successful launch, a spokesman for the Japan Aerospace Exploration Agency (JAXA) told the Agence France-Presse news agency that "the satellite was removed from the rocket" and put into the planned orbit about 15 minutes after liftoff.

The blastoff came just nine days after a Russian rocket, carrying supplies to the ISS, crashed on launch. Friday's launch was described as indispensable due to the grounding of US private aerospace manufacturer SpaceX's rockets after a launch explosion.

The Japanese vessel is carrying a 'space junk' collector that scientists will use to pull junk out of orbit around Earth, clearing up tons of space clutter including cast-off equipment from old satellites and pieces of rocket.

China's biggest rocket has blasted off from the southern coast, helping to advance its own plans for a space station. The Long March 5 is estimated to be three times as powerful as previous Chinese technology. (04.11.2016)

The Indian Space Research Organization (ISRO) has successfully deployed eight satellites into two different orbits. The mission was the PSLV rocket's longest and most complex trip. (26.09.2016)

An explosion has rocked the site of a planned SpaceX rocket launch in Florida. Witnesses reported seeing a giant fireball and buildings shaking miles away from the blast. No one was injured but the payload was lost. (01.09.2016)

The waste should burn up harmlessly on re-entry into the Earth's atmosphere.

Scientists say more than 100 million pieces of junk are estimated to be flying around in orbit, thanks to over 50 years of human space exploration. The sheer amount of hazardous waste is now thought to pose a threat to future space exploration.

The experiments could lead to much larger uses of junk collection systems over the next decade.

Also on board are six new lithium-ion batteries for the ISS' solar power system, which will allow astronauts to conduct spacewalks next month to replace the old nickel-hydrogen batteries that store energy generated by the station's big solar panels.

In a televised interview from the space station following Friday's launch, NASA astronaut Peggy Whitson said there were enough supplies on board the ISS to last until spring. The Japanese shipment will stretch that out even further.

"Spaceflight's not an easy thing," she said. "We just have to keep pressing ourselves to do the right thing, make sure we're doing all the right tests ... so that we don't have these problems."

See this picture gallery containing photos tweeted by astronaut Scott Kelly from the ISS in 2015.

China's goal to catch up with major space powers like the US and Russia has moved a step forward, with the nation flagging off its longest manned mission. Beijing aims to have a permanent space outpost by 2022. (17.10.2016)

The ongoing conflict in Ukraine has cast doubt over the future of the cooperative space program. A Russian capsule was sent to to the station to bring a US astronaut back to Earth.