A cargo mission has launched from Virginia taking 7,400 pounds of supplies for astronauts. Some 80 ice cream treats as well as a VR camera for a National Geographic documentary are on their way into space. 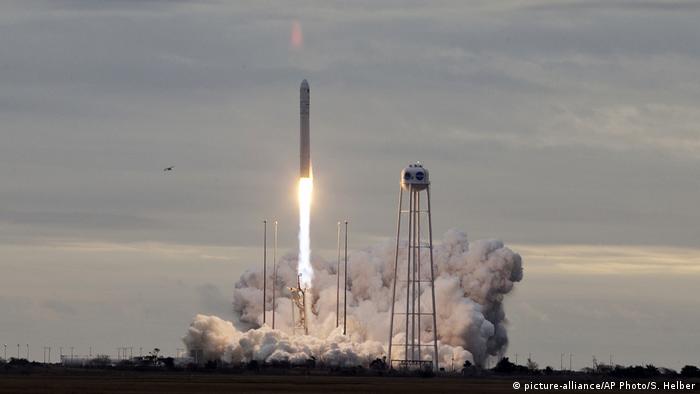 A "Cygnus" supply capsule blasted off from Wallops Island, in the US state of Virginia, on Sunday heading for the International Space Station.

NASA's commercial shipper, Orbital ATK, launched the capsule packed with 7,400 pounds (3,350 kilograms) of food, supplies and experiments for the six-member astronaut team aboard the station.

Crowds gathered at Wallops on the chilly November morning to watch the launch, which was Orbital ATK's eighth mission for NASA. SpaceX also has a contract with NASA to send cargo loads to re-stock the station.

The capsule should reach the space station by Tuesday, the US space agency said.

The space station's current crew — consisting of three US-Americans, two Russians and one Italian — will soon be able to enjoy some sweet, frozen treats among other supplies that will soon be delivered to the orbiting lab.

A total of 80 frozen fruit bars, ice cream sandwiches, and cups of chocolate and vanilla ice cream are en route to the station, NASA said.

The crew will also be receiving a virtual reality camera with the supplies to help film a National Geographic television series.

The space station crew will "record a series of virtual reality pieces for incorporation into a larger documentary about natural history and the solar system," NASA said in a statement.

How astronauts work out in space

Hardware and equipment for scientific research is also included in the supply payload. One of the experiments on board is a satellite that will test how bacteria grows in microgravity. It will also determine the minimum amount of antibiotic required to stop its growth.

The US space agency hopes to learn how bacteria acts during long-duration missions, as NASA hopes to send people into deep space in the coming decades — including a human mission to Mars sometime in the 2030s.

A total of 14 miniature satellites, known as CubeSats, are also being transported to test a laser communication system.

Astronauts will unload the capsule's contents and then repack it with trash that will burn up upon re-entry into Earth's atmosphere when it ships off in early December.

Sunday's launch was initially scheduled to take place on Saturday, but was delayed after a wayward plane flew near the launch pad. Orbital ATK named the capsule after the last man to walk on the moon, Gene Cernan, who died in January.